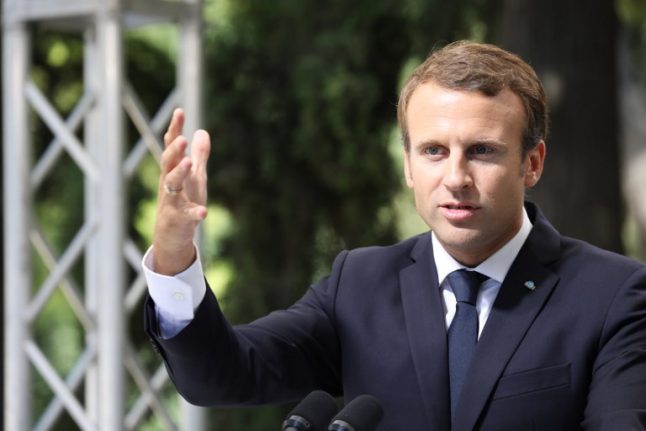 Macron's comments drew fire from all sides. Photo: LUDOVIC MARIN / AFP
The 39-year-old centrist sees revamping France's complex labour regulations as key to tackling France's tenaciously high unemployment rate, currently 9.5 percent — roughly twice that of Britain or Germany.
Returning to controversial remarks he made last month, Macron said on a two-day state visit to Greece: “France is not a country which is open to reforms.”
“France does not reform … because we rebel, we resist, we circumvent. This is what we are like,” he told expatriates at a French archaeology school in Athens.
He said he took responsibility for similar comments made in Romania on August 24 about France's reputed aversion to change.
Macron said the pressing need was “a profound transformation in France” especially with regard to labour policy. He stressed his reforms would be carried out “without brutality, with composure, with reason and pragmatism.”
The president stressed his “absolute determination” to press ahead with the scheme.
“I will not yield anything, either to the lazy, the cynics or the extreme. And I ask you to have the same determination, each day.”
The new measures are aimed at helping small businesses by allowing bosses to negotiate contract terms and conditions directly with their employees without union involvement.
They also cap the sometimes prohibitive costs of firing employees by limiting court awards for unfair dismissals and make it easier for multinationals operating in France to lay off workers.
The Communist-backed CGT, France's biggest union, has said it will stage street protests next month — a move that has often torpedoed similar reforms in the past — although other unions have not said they will join the rallies.
Macron's new comments sparked a backlash back home from the far left and far right.
“The president is insulting people who oppose his politics. Emmanuel Macron does not love the French, that's for sure” Pierre Laurent, secretary general of the French Communist Party, said in a tweet.
Jean-Luc Melenchon, head of the France Unbowed movement, who finished fourth in this year's presidential election, joined the outcry. For Macron to speak ill of compatriots “in front of foreigners and while he is abroad is double the cheek and twice as insulting,” Melenchon said on Facebook.
On the far right, Florian Philippot, vice president of the National Front party said “insulting people has become second nature for Macron.”
The presidency however put out a statement saying that Macron had merely recalled the challenges facing France and the reforms necessary to overcome them.
“He concluded by repeating his determination to act against all the conservatism that has prevented France from reforming,” the Elysee presidential palace said.