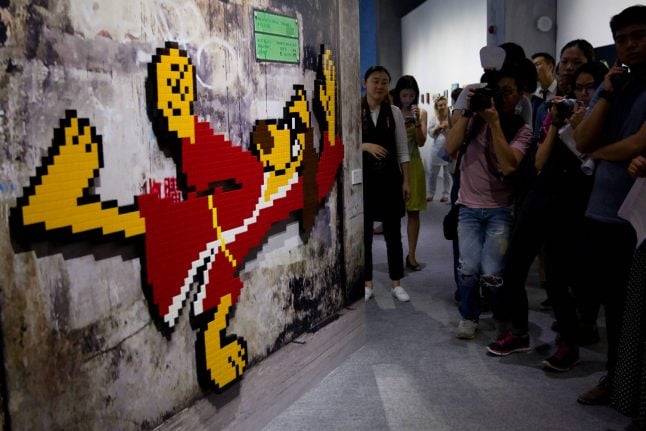 'Hong Kong Phooey' by the French artist known as Invader on exhibition in Hong Kong. Photo: AFP
The pair were detained on Wednesday evening as they were climbing a ladder, dressed in fluorescent green jackets like those of city workers, to scrape off one of the works made up of tiny tiles as their Mercedes car was parked beside them.
More than a dozen pieces from the artist had been torn from walls all around the city in recent weeks.
Invader, whose real name or identity is unknown, produces mosaic works using bathroom tiles that hark back stylistically to early video games such as the 1978 “Space Invaders”.
Some of his “invasions” have resulted in him being questioned by police, but copies of his works have often sold for hundreds of thousands of dollars.
READ ALSO:
Two years ago, his mosaic of 1970s American cartoon character Hong Kong Phooey sold at auction at Sotheby's in Hong Kong for HK$2 million (€210,000).
Paris City Hall said in August it “has decided to file a complaint for abuse of functions” because the two suspected thieves “were disguised as Paris city workers” in order to steal the mosaic works.
Authorities were alerted to the thefts on social media, with Parisians snapping pictures of the pretend workers on Twitter and asking why the city was removing the mosaics.
Invader previously addressed the issue of theft on his official website, saying that his pieces have been “removed, damaged or destroyed by individuals who seek to resell them.”
But the artist added: “Given the type of tiles I use, to steal the work is impossible. These individuals by removing the mosaics destroy the piece and then have to buy ceramics to repair or recreate the work.”