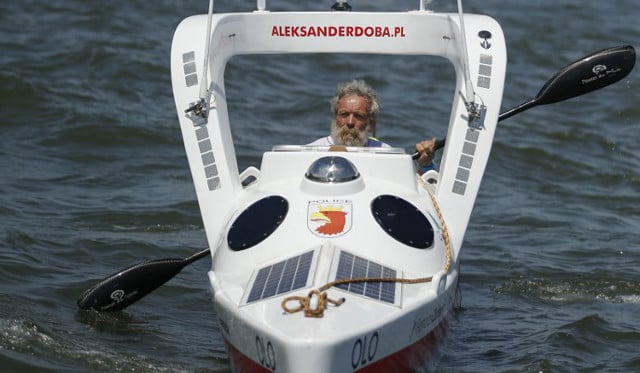 AFP
“Hello! This is France, it's Aleksander Doba, and I officially took my first steps on dry land in Europe at 12:25”, the bearded 70-year-old said in a video posted on his official Facebook page.
“I feel great… and I'm very happy that I finally reached Europe!” a jubilant Doba said after arriving in Le Conquet, a town about 30 kilometres (19 miles) from the French city of Brest on the Brittany coast, where he was greeted by the applause of several dozen fans.
Doba started his third trans-Atlantic crossing on May 16th from Barnegat Bay, braving high seas and saying that he even “patted a shark” during his 4,150-mile (6,680-kilometre) journey across the north Atlantic.
“I felt completely drunk although I was totally sober… I was a bit off-kilter, but I'm fine, alive and well!” Doba added, describing how it felt to set foot on solid land after months rolling on the waves.
The successful crossing came after Doba was forced to give up an attempt in June 2016 because of strong waves off the US coast at Sandy Hook, New Jersey, that had pushed him back ashore.
A star in Poland, the gray-bearded Doba gained global attention when he was named a National Geographic adventurer of the year in 2015.
At that point, the retired engineer — also an avid rock-climber, parachutist, glider pilot, sailor and yacht skipper — already had two solo Atlantic kayak crossings under his belt.
The first, between October 2010 and February 2011, took him from the Senegalese capital Dakar to the Brazilian city of Acarau.
The second saw him set off from Lisbon in October 2013 and arrive in Florida in April the following year.
Url copied to clipboard!