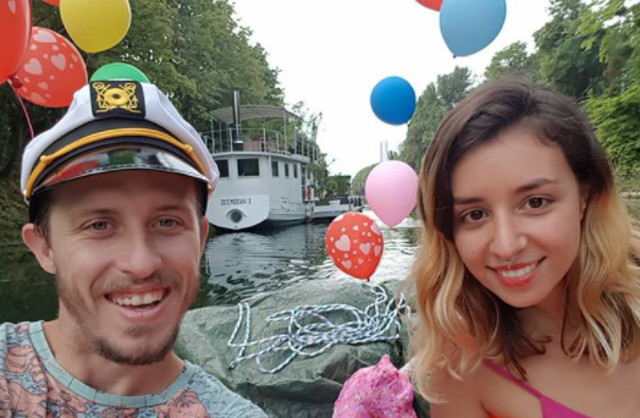 Capitaine Remi/Facebook
“We’re from Paris and we see the Seine every day,” a panting Rémi Le Calvez told The Local by telephone as he pedalled on the river about 20km upstream from the city of Rouen.
“So we said to ourselves that it would be fantastic to follow it all the way to the sea,” he said, speaking just over a week after he and partner Victoria Berni set off from the suburbs of the capital.
Le Calvez, 30, who describes himself as a travel blogger, and Berni, a 26-year-old civil servant, had this summer entered into a PACS, the French term for a civil union, and wanted to celebrate it by going on a romantic honeymoon. Château Gaillard in Les Andelys. Capitaine Remi/Facebook
Their ultimate destination is the pretty seaside town of Honfleur at the mouth of the Seine.
But there will be a lot more serious pedalling to do if they want to get there by this Friday as planned.
They have so far managed up to 40 km a day on the three-metre-long boat that also carries their food and clothing for the trip for which they had to get special permission from France’s waterways authority.
After Rouen the river becomes tidal, which means that they will often be battling against currents, and has a lot more traffic that they will have to take into account.
You can follow the adventurous pair's progress on Facebook and Instagram.
The pedal boat trip comes a year after the pair hitch-hiked from Paris to Lapland dressed in Santa Claus outfits.
For their next adventure they hope to tour Sri Lanka in a tuk tuk.
By Rory Mulholland
Url copied to clipboard!