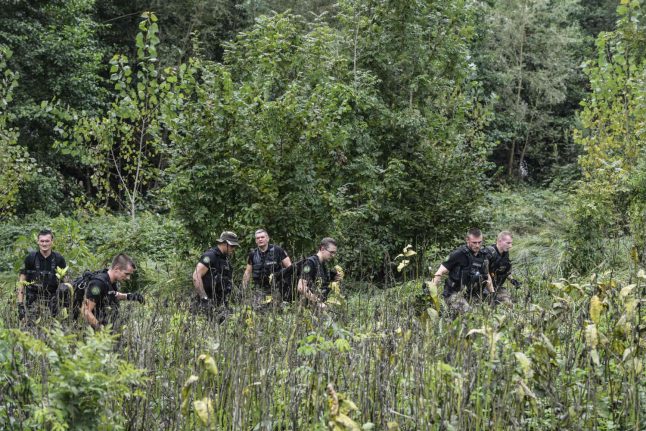 Maelys de Araujo was last seen in the early hours of Sunday at a community hall where the wedding was held in Pont-de-Beauvoisin, a village some 50 kilometres north of Grenoble.

According to a source close to the investigation, the two suspects, both 34-year-old men who knew each other, were released on Friday evening.

Both had been held over inconsistencies in their statements.

“The investigation is ongoing,” the source said, without further comment.

Investigators suspect that the little girl with dark brown hair and eyes, who was attending the wedding with her parents, was kidnapped.

Scores of police, search and rescue teams, divers and cavers have spent the week trawling through the heavily wooded area for signs of her.

On Saturday morning, more than 1,200 people were expected to participate in a “citizens' search” for signs of the girl's whereabouts, a private initiative organised via social media networks, and coordinated by about 15 gendarmes.

A first group of about 400 volunteers braved heavy rain to gather at a parking lot at the local high school at 8:00am, before donning yellow safety vests and splitting up into groups to search the surrounding forest.

“We're here for her, to find her,” said a person close to Maelys's family who was taking part. “We're still hoping to find her safe and sound.”

“It's really horrible… we cannot remain indifferent. We have come here for a family facing a shameful situation,” said Frederic, a volunteer who had come with his wife to help trace the girl.

The volunteer teams were expected to relay each other throughout the day, and a hotline has been set up to signal any clues, though police underscored that the areas had already been examined.

Police have interviewed about 250 people since Sunday, including most of the 180 guests at the wedding, as well as several others who attended parties held the same night at a nearby bar and church hall.

Sniffer dogs lost the scent from Maelys's cuddly toy in a car park outside the venue, raising fears she was kidnapped and whisked away by car.

“We're getting farther and farther away from the site of the disappearance,” a source close to the inquiry told AFP. “We still think that she was probably taken away in a vehicle.”

Police chief Yves Marzin said authorities are also examining photos and videos taken that day, as well as all calls to the area.

“It is like looking for a needle in a haystack, extremely tedious work but important,” he said.