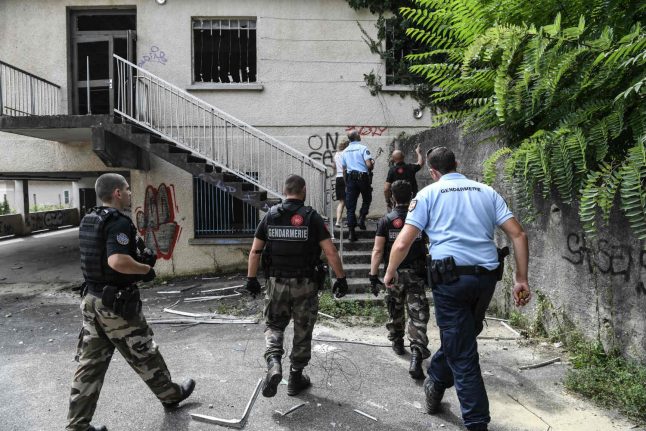 Maelys de Araujo was last seen in the early hours of Sunday at the community hall where the wedding was held in the village of Pont-de-Beauvoisin, about 50 kilometres north of Grenoble.

Scores of police, search and rescue teams, divers and cavers have spent the week trawling through the heavily wooded area for signs of her.

Investigators suspect that the little girl with dark brown hair and eyes, who was attending the wedding with her parents, was kidnapped.

A 34-year-old man who was in the area on the night of her disappearance was arrested on Friday over “contradictions” in his statement to police, state prosecutor Dietlind Baudoin said.

The man is a friend of the 34-year-old wedding guest arrested on Thursday, also over inconsistencies in his story.

Baudoin said the man taken into custody on Thursday was absent from the wedding during a period that could correspond with Maelys's disappearance.

A source close to the investigation said the police were looking into a mobile phone that he concealed from the authorities.

The police will compare his account of events with that of his friend, Baudoin said in a statement. Bernard Meraud, the first suspect's lawyer, told AFP on Friday that his client would be detained until at least Saturday morning, after which prosecutors have to charge him with a crime for him to remain in custody.

“My client has denied any involvement in the kidnapping,” Meraud said, adding that because his client knew the family, he of course would have had closer contact with Maelys over the course of the wedding.

Meraud did not provide details about what contact his client may have had with Maelys, but said the man lived with his parents, performing odd jobs because he “currently was on sick leave”.

He “provided a number of explanations that seem apparently plausible,” the lawyer said.

While the case is being treated as a kidnapping, Baudoin said Friday that no line of investigation was being ruled out.

Police have interviewed about 250 people since Sunday, including most of the 180 guests at the wedding, as well as several others who attended parties held the same night at a nearby bar and church hall.

Sniffer dogs lost the scent from Maelys's cuddly toy in a car park outside the venue, raising fears she was kidnapped and whisked away by car.

A gendarme squad from the Paris region arrived Wednesday to assist in the search.

On Thursday teams expanded the search to fields and roadsides surrounding the wedding venue, which continued into Friday.

More than 1,000 people have registered via Facebook to take part in a massive search on Saturday in the area surrounding the town, coordinated by local police.

“We're getting farther and farther away from the site of the disappearance,” a source close to the inquiry told AFP. “We've double-checked all the leads we have. We still think that she was probably taken away in a vehicle.”

Police chief Yves Marzin said authorities are also examining photos and videos taken that day, as well as all calls to the area.

“It is like looking for a needle in a haystack, extremely tedious work but important,” he said. “As long as there is hope, we will apply any means necessary”.