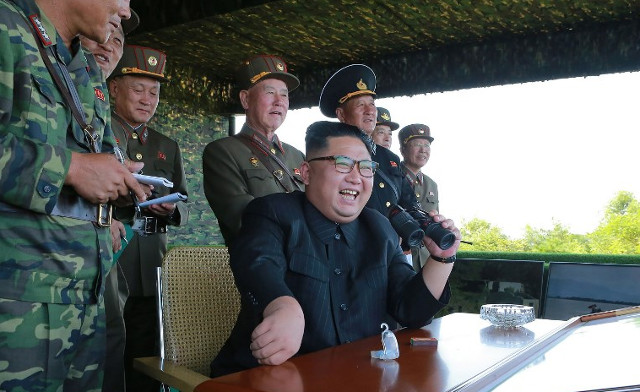 AFP
Jean-Yves Le Drian called the situation following a string of missile tests by Pyongyang “extremely serious” and urged the reclusive state to turn to dialogue to ease spiralling tensions.
“We see a North Korea whose objective is to have missiles capable of transporting a nuclear weapon tomorrow,” Le Drian told RTL radio.
“In a few months, that will be a reality. At that moment, when it has the capability to hit the US, even Europe and at the very least Japan and China, with a nuclear weapon, the situation will be explosive.”
READ ALSO: Early on Tuesday, North Korea fired an intermediate-range Hwasong-12 over Japan, prompting US President Donald Trump to say that “all options” were on the table in an implied threat of pre-emptive military action.

The UN Security Council denounced Pyongyang's latest missile test, unanimously demanding a halt to its programme.
Le Drian called on Pyongyang to “return to the path of negotiations” in a bid to ease tensions.
A joint mediation effort put forward by China and Russia would involve a mutual pause in both missile tests by North Korea as well as the joint South Korean-US military exercises by Seoul.
Pyongyang has also threatened to fire rockets towards the US Pacific territory of Guam.
In July, it carried out its first two successful tests of an intercontinental-range missile, apparently bringing much of the US mainland into range.
Earlier in August, French President Emmanuel Macron warned against an “escalation of tensions” over North Korea amid a growing war of words between Washington and Pyongyang.
In a statement, Macron voiced his “concern at the ballistic and nuclear threat coming from North Korea”, saying the international community needed to work to get Pyongyang to “resume the path of dialogue without conditions”.
Url copied to clipboard!