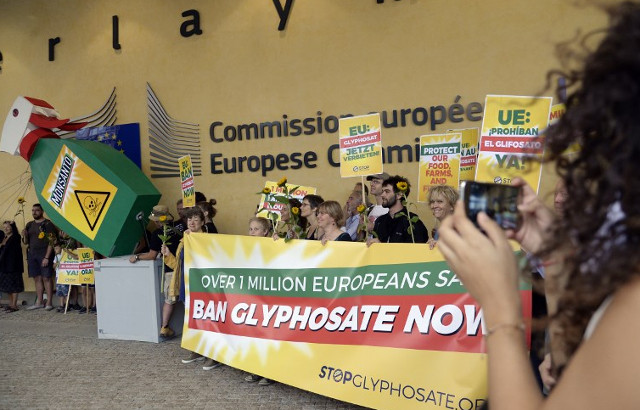 Activists pull down a giant bottle of weedkiller as they demonstrate in favor of a Glyphosate ban by the European Union. AFP

“France will vote against a re-authorisation of glyphosate for 10 years given the uncertainties that persist with regard to its dangerousness,” the source in the ecology and sustainable development ministry told AFP.

The opposition of France could block obtaining the qualified majority of EU member states needed to renew the licence.

Glyphosate is the active ingredient in the best-selling herbicide Roundup produced by the US agro-chemicals giant Monsanto, but there have been concerns it may cause cancer.

Opponents of glyphosate, led by Greenpeace, point to research from the World Health Organization that concludes it may be carcinogenic, and are calling for an outright ban.

But in March, the EU's chemicals agency said glyphosate should not be classed as a carcinogen.

And in May, a review carried out by experts from both the WHO and the UN Food and Agriculture Organization said “glyphosate is unlikely to pose carcinogenic risk to humans from exposure through the diet”.

On the basis of that research, the EU Commission proposed renewing the licence, which is scheduled to expire at the end of this year.

The EU is scheduled to vote on the matter at meeting of a panel of experts on October 4, and the opposition of France likely means there won't be a sufficient majority in favour of renewing the licence.

In June, more than one million people signed a petition in June, demanding the EU ban glyphosate.