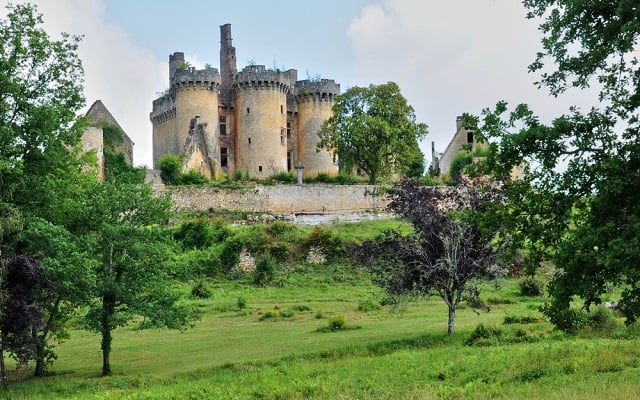 The castle of Saint-Vincent-le-Paluel in the Dordogne department of France is going up for auction, and the incredible 15th-century building could be yours… for just €50.

It might sound too good to be true, and full disclosure, you won't have the castle to yourself for that price.

But in order to save the building from ruin, a crowdfunding operation has been launched, allowing hundreds of castle-lovers to buy a piece of the château – and become partial owners of the heritage site.

The 375-metre squared building is in such poor condition it has been confiscated by authorities which will put it up for auction on September 21st.

The starting price is €250,000, and the 'Adopt a Castle' organization has started a campaign to save the building.

By Tuesday, more than 400 people had already made contributions to raise over €30,000. The castle's location marked on a map.

Should the campaign win the auction, it plans to restore the castle and then look into original ways to bring it back to life – and contributors will have a say in this.

While fundraising campaigns have been used to save historic buildings before, it's the first time Adopt a Castle has allowed donors to become shareholders, meaning they will get a vote in the future use of the chateau.

As well as the castle itself, classified as a historical monument, the property includes an eight-room mansion, stables, a windmill, a pool, a dovecote, as well as woods and meadows.

The castle was attacked by Nazi forces in 1944 and has fallen into a state of disrepair since then.

It featured in the 1968 film Le Tatoué, starring Louis de Funès, and one option is that it will be transformed into a museum celebrating the actor's career. The existing Louis de Funès museum in Nantes recently closed.

In the film, de Funès character arrives at the castle and exclaims “It's a ruin!” – but if the crowdfunding campaign is a success, that won't be the case for long.

READ ALSO: Why everyone should party in a French chateau at least once