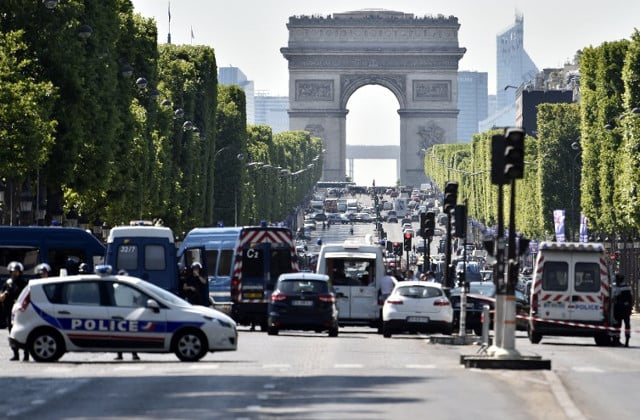 AFP
“Providing security for our citizens means that the fight against Islamist terrorism is our first priority,” he told some 200 French ambassadors gathered in Paris.
Since early 2015, France has suffered a series of terror attacks that have claimed more than 230 lives. These have included the targeting of soldiers and police officers on patrol at popular tourist spots.
“There's no place for naivete, nor for fear of Islam which confuses Islamism and Islamic,” he said, calling assuring the security of the French the “raison d'etre” of the country's diplomatic efforts.
Macron announced the organisation of a conference on staunching the sources of funding for terror groups, to be held in Paris in early 2018.
He also argued against taking sides in the regional power battle between Iran, a majority Shiite Muslim country, and Saudi Arabia, a Sunni power.
“Some have chosen (their camp). It's a mistake. The strength of our diplomacy is to speak to all sides,” he said.
READ ALSO: The 39-year-old leader also insisted there was “no alternative” to the 2015 nuclear deal with Iran, which has been fiercely opposed by US President Donald Trump.
“There is no alternative to the non-proliferation agenda. It enables a constructive and demanding relationship with Iran,” he said.
Facing dismal approval ratings less than four months into his term, Macron was looking to burnish his foreign policy credentials with the speech, which is a fixture on France's political calendar.
France's youngest ever president has shown determination to restore what he sees as the country's declining international prestige under his predecessor, Socialist president Francois Hollande.
He has won kudos for making a bold start on the international stage, hosting both Trump and Russian President Vladimir Putin within his first weeks in office.
He raised human rights with Putin and spoke out against Trump's decision to withdraw the United States from the Paris accord on fighting climate change.
Tuesday's speech came a day after Macron hosted a mini-summit with African and European leaders on the migrant crisis.
The leaders backed proposals to screen asylum seekers in Chad and Niger as a way to prevent thousands from taking perilous journeys across the Mediterranean.