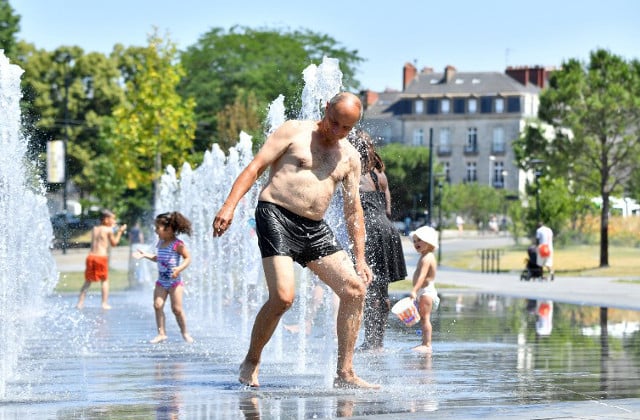 Holidaymakers at the beach. Photo: AFP

Eight departments in east-central and southern France were placed on 'orange alert' – the second highest level – for the heatwave on Monday by national weather agency Meteo France.

The orange heatwave warning advises people in the area not to go outside during the hottest period of the day or for more than three hours in total, and to stay hydrated.

READ ALSO: How to keep cool during a heatwave in France The departments on alert are Rhône, Loire, Puy-de-Dôme, Allier, Saône-et-Loire, and Jura in the central-east of the country, as well as Tarn and Tarn-et-Garonne in the south-west.

The alerts are expected to remain in place until at least Tuesday morning.

Rhône, Loire and Puy-de-Dôme were put on the orange alert on Friday after temperatures reached the mid-30s.

The mercury was set to reach 34-36C by Monday afternoon, and could top 37C in Albi in the Tarn department.

Further north, milder weather is predicted but the week will still got off to a warm and sunny start, with a maximum of 32C expected in Paris on Monday afternoon.