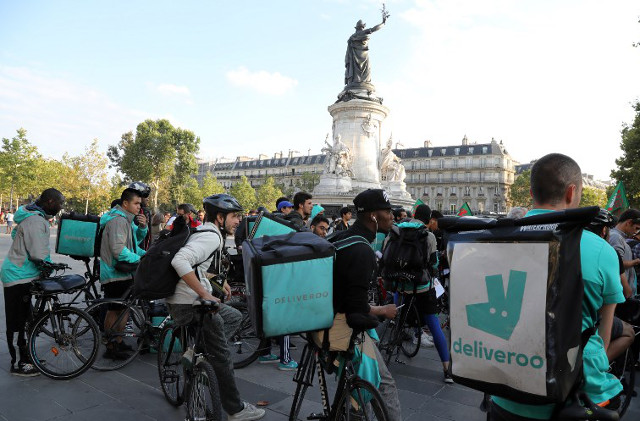 AFP
French riders working for the food delivery company Deliveroo, one of the stars of the new “gig” economy, have staged protests to complain about changes to their pay.
More than a hundred cyclists who deliver food from restaurants in the cities of Paris, Bordeaux, Nantes and Lyon demonstrated on Sunday, with another round of protests planned for Monday, including at the group's Paris offices.
Britain's Deliveroo has switched all its riders from August 27 to the same contract in which they are paid per delivery — between 5.0-5.75 euros — rather than an hourly rate.
READ ALSO: “Overall it means losses of 20-30 percent for us. It's huge,” Diego Guglieri Don Vito, one of the organisers of a demonstration in the eastern city of Lyon, told AFP.
Deliveroo has said that the change affects about 600 out of 7,500 bikers in France who were on contracts signed before August 2016.
The British company employs all of its riders as independent contractors, rather than as employees, meaning that they do not have rights such as the minimum wage or paid holidays.
This so-called “gig” economy, in which contractors have no job security and are paid only when they work, is seen by some as offering new flexible forms of employment but criticised by others as being exploitative.
Delivery riders in France have formed trade unions and collectives to try increase their bargaining power in negotiations over pay and conditions with Deliveroo and its competitors Foodora and UberEats.
The leaders of the Deliveroo protests are demanding 7.5 euros per delivery and a guaranteed minimum of two deliveries per hour.
“The movement is only just starting. We're in the process of bringing everyone together, including at the European level,” said Jerome Pimot, head of one of the French collectives called U'live. “Everyone has the same lack of job security.”
Since its London launch in 2013, Deliveroo has expanded into dozens of cities across Europe, Asia, Australia and the Middle East.
It partners with restaurants that do not have delivery services, charges the customer a small delivery charge and takes a commission from the restaurant.
Url copied to clipboard!