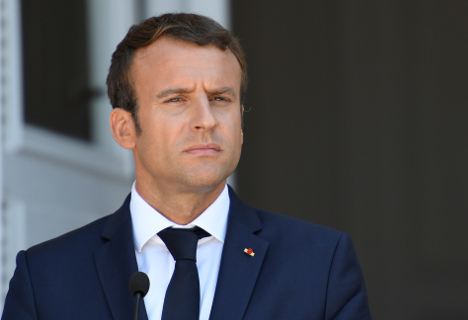 No cover-up: President Macron has spent €26,000 on make-up since May. Photo: Bertrand Guay/AFP

The bill, revealed by Le Point magazine and confirmed by the presidency to AFP on Friday, was paid to a freelance make-up artist for work since the centrist took power in mid-May.

It recalled an embarrassing revelation about the balding former president Francois Hollande who was forced to admit to employing a private hairdresser on a pre-tax monthly salary of nearly €10,000 euros ($11,800).

Opponents seized on the total of the make-up bills – one for €10,000 and another for €16,000 – with most of the French media publishing stories about the issue.

“While France is slaving away, Macron is spreading (the equivalent of) 23 times the minimum wage on his face,” wrote far-right strategist Florian Philippot on Twitter.

A source in the presidency told BFM television that future costs would be “significantly reduced,” while claiming that that both Hollande and former right-wing president Nicolas Sarkozy spent more on make-up.

A beauty writer in Britain's The Telegraph newspaper offered some tips for some cheaper male cosmetics in an article entitled “How President Macron could save himself £8000 on make-up a month.”

Many male politicians in the West wear foundation while making media appearances to counter the bleaching effect of studio lights or flash photography, as well as concealer to cover up signs of under-eye fatigue.

The leak to Le Point comes at a bad time for France's youngest-ever president whose approval ratings have fallen sharply since his victory in May standing in his first ever election.

A recent poll showed that only 37 percent of French people were happy with his performance so far and he faces a tricky battle to ram through promised labour market reforms next month.

Earlier this month, Macron's wife Brigitte, his former school teacher who is 25 years older than him, joked about the difficulties of living with her youthful husband during an interview with Elle magazine.

“The 20 years of age difference… it's really nothing,” she said. “Of course, when we're having breakfast, there's me with my wrinkles and him looking fresh, but it's like that.”