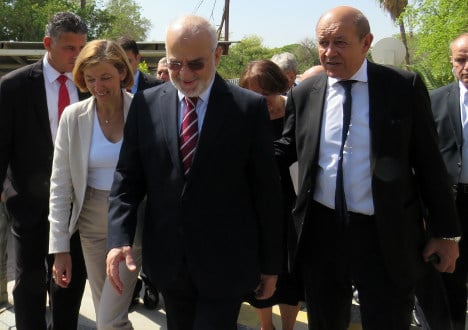 Visiting Foreign Minister Jean-Yves Le Drian said in a meeting with Iraq's Prime Minister Haider al-Abadi in Baghdad that the €420 million ($512-million) would be released before the end of 2017, the official told AFP.

“France was present from the beginning of the battles against Daesh (Islamic State group) and will be present as well during time of peace,” said Le Drian, who was accompanied by Defence Minister Florence Parly.

The loan is aimed at helping the war-torn country implement reforms, improve public services and boost the performance of its state enterprises.

The visit by France's foreign and defence ministers come as Iraqi forces announced the ouster of the Islamic State group from the centre of Tal Afar, one of the jihadists' last remaining stronghold in the north.

The advance, just days into an assault on the strategic town, comes six weeks after Abadi declared victory over IS in second city Mosul, where the jihadist group declared its “caliphate” in 2014.

One the plane to Baghdad, Le Drian said that Iraq now faced the dual challenge of “a war that is coming to an end and the beginning of the stabilisation and reconstruction”.

France is a key member of the US-led coalition that has been battling Isis in Iraq and neighbouring Syria.

French forces have carried out air and artillery strikes in support of Iraqi operations against the jihadists, who have lost much of the swathes of territory they had seized in 2014.

France, which refused to take part in the 2003 American-led invasion that brought down dictator Saddam Hussein, is keen to participate in the reconstruction of Iraq.

The cost of reconstruction has been estimated at between $700 billion and $1 trillion (€590 billion to €840 billion).