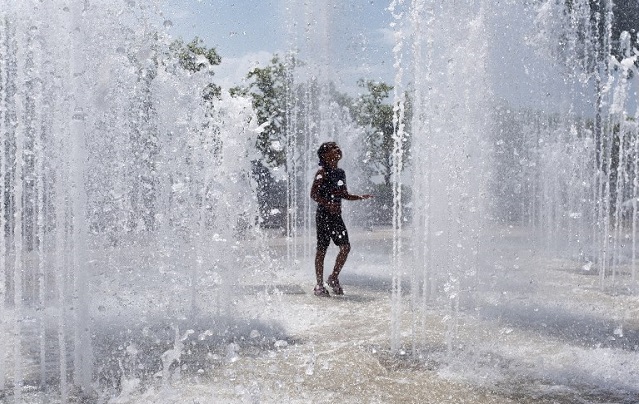 A girl cools off in a Lyon fountain. Photo: AFP

The Rhone department has been placed on orange alert for heatwaves by France's national weather agency Meteo France, with the warning expected to remain in place until at least Saturday.

The orange heatwave warning – the second highest level – advises people in the area not to go outside during the hottest period of the day or for more than three hours in total, and to stay hydrated. Elsewhere in France, temperatures are also expected to rise, with the mercury set to hit a scorching 35-36C in the south-west, according to the weather agency.

Not all of the country will be basking in the sun, however, with showers and even thunderstorms predicted for the northwest, though temperatures will still be warm, between 25C and 30C.

Temperatures in the south will stay above 30C, reaching 35C in some areas on Sunday.

Thunderstorms are predicted in the Pays de La Loire and the north-eastern border areas.

The hot weather is expected to continue in the Burgundy, Franche-Comté, and Auvergne-Rhône-Alpes regions in central-eastern France until the end of the month, with temperatures at 7-8C above the seasonal average.