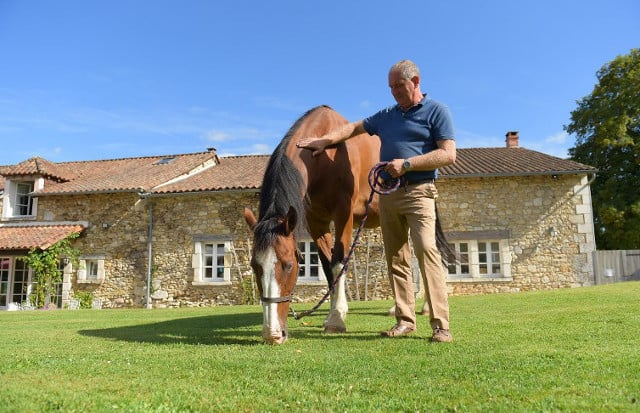 AFP
The rolling green hills of the Dordogne region are home to 22 retired police horses, who are getting their second wind in a sanctuary run by former Scotland Yard officer Roland Phillips.
For some of the retirees, the sanctuary situated a few kilometres from the town of Brantome is a place to recover from the riots that rocked England in 2011 after the shooting dead of a mixed-race man by London police.
In keeping with British policing tradition, the officers used horses rather than tear gas or water cannon to disperse the crowds.
“The last line of defence is the horse,” Phillips explained.
Some of his other charges saw action during the May 2016 unrest that erupted after a football game between London side West Ham and Manchester United at Upton Park stadium in the city's east.
Frontline action
Her Majesty's police force employs dozens of horses, some of whom have become celebrities on social media.
But no provision is made for those that are no longer up to the job, who risk being euthanised if no one offers them a home.
Phillips, a 60-year-old former police inspector, grew up at a sanctuary for retired and abused horses in southern England.
A year after joining thousands of British pensioners who have made their home in Dordogne, he and his wife Alison began taking in equine retirees in 2010. His most recent acquisition is Ranger, a nine-year-old with a chocolate brown coat and jet-black mane who was put out to pasture after the Upton Park riot.
Ranger is suffering from severe arthritis, which Phillips believes was brought on early by having firecrackers and other projectiles lobbed at him.
On one occasion, a demonstrator sought to spook him by shining a laser beam into his eyes.
“Those horses have been through a very tough time indeed,” the greying former inspector said, lovingly stroking the horse's nose.
Lewis, a sensitive 15-year-old with a broad white stripe bisecting his face, was badly traumatised by the violence of the urban riots of 2011.
“He was too soft by nature to be a police horse. He lacked confidence,” said Phillips.
On his arrival in France, Lewis shied away from humans, spending his days lying in the back of his stall.
Six years later he is one of the stars of the stables and enjoys the pats lavished on him by the hundreds of visitors who pass through each year.
“We made him sociable again,” said his proud owner. While the police horses are the main attraction, Brantome sanctuary also takes in retired hunters and other offcasts.
One of the youngest residents, five-year-old Bella, was abandoned for failing to inherit her palomino father's gold coat.
With horses often living into their late twenties, Bella can look forward to many years of basking in the sun.
The stable's longtime patriarch, Walter, recently passed away at 34, making him a centenarian in human terms.
Adopt a horse
Keeping horses is a costly business and bringing them over from Britain by ferry is a further drain on the pocket.
“It's very tight. We just about have enough to keep going,” said Phillips, who relies on volunteers to help groom the animals and clean out the stables.
Donations, tours and events, such as weddings, concerts and English-style afternoon teas help cover the costs.
The sanctuary also runs a scheme whereby horse lovers can “adopt” a resident for between 15 and 20 euros ($18 and $24) a year.
Url copied to clipboard!