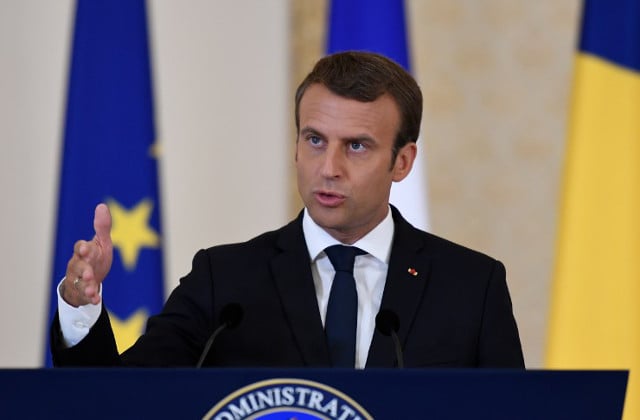 AFP
“Some political or business circles seek to use the EU's funds while at the same time developing a system of social and fiscal dumping,” he said in Bucharest during a whistle-stop visit to eastern and central Europe.
“This will lead to the dismantling of the European Union” if there is no reform agreement at a Brussels summit in October, he added after holding talks with Romanian President Klaus Iohannis.
“Public opinion in more developed countries with higher salaries will not accept the system in its current format,” he warned.
Macron made the remarks on the second leg of a three-day tour through Austria, Romania and Bulgaria, as he seeks to drum up support for his ambitious reform proposals.
READ ALSO: French President Emmanuel Macron (L) and Austrian chancellor Christian Kern. AFP
He is seeking to drum up support for revamping the rule at a European Union summit in Brussels on October 19-20.
The so-called Posted Workers Directive has come under fire from wealthy nations like France, which argue that the rule amounts to “social dumping” in which payments to costly health and welfare systems are avoided.
In doing so, firms do not have to make contributions to the host country's health and welfare systems — something that critics call “social dumping.”
Backed by Vienna and Berlin, Paris wants the job duration of detached employees to be limited to 12 months — half the period proposed by the European Commission.
France also demands greater efforts to fight fraudulent use of the directive, under which 286,000 people were employed in the country in 2015.
The topic has become a political hot potato pitting western EU members against their poorer neighbours in the former communist bloc, where most of the cheap labour comes from.
Eastern and central European governments say Macron's proposals go too far and will undercut their competitiveness.
However, there were signs of a breakthrough after discussions with the heads of state of Slovakia and the Czech Republic in Salzburg on Wednesday.
Slovak Prime Minister Robert Fico acknowledged that finding a solution would be “good news for the EU”.
Romania's president on Thursday also underlined the “strong discontent” in his region over the issue.
The directive needs to be “improved,” he said, but without “eliminating competition or the free market”.
Macron will discuss the issue with Bulgarian leaders on Friday.