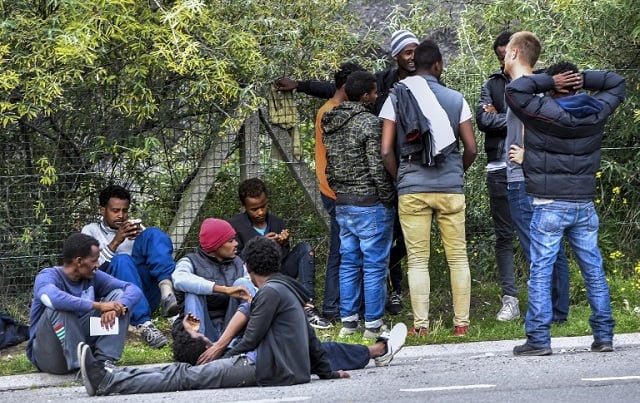 Migrants gather on a road near Calais. Photo: AFP

The survey, published by the L'Auberge des migrants organization on Monday, reveals the precarious conditions many migrants and refugees are living in.

Authorities dismantled the infamous 'Jungle' camp in Calais in autumn 2016, but hundreds of migrants continue to sleep rough there.

More than three quarters (76 percent) said police or cleaners had confiscated their shelter within the previous week. On average, respondents said this had happened to them three times in the past seven days. Migrants during the evacuation of a makeshift camp near La Chapelle in Paris. Photo: AFP

And it's rare to get a full night's sleep, with the migrants saying they had an average of three and a half hours of sleep each night. More than half (55 percent) of the 162 migrants who responded to the survey said they slept less than four hours per night.

Just one percent reported sleeping for the recommended seven hours.

The survey also shed some light on the profile of those sleeping rough in Calais. Around a third (31 percent) had been there for more than three months, while the same proportion had spent between one and three months in the area.

Last week, authorities installed portable toilets and taps outside a charity centre on a road near the northern port of Calais.

The interior ministry and the city of Calais had appealed against a June ruling by a court in nearby Lille which ordered them to provide sanitation facilities for the migrants.

They had expressed fears that this would encourage new makeshift camps, but France's highest administrative court rejected the appeal, saying the state's failure to provide for the migrants' basic needs “exposed them to inhuman and degrading treatment”.

France's new centrist government has taken a tough line on Calais, with Interior Minister Gerard Collomb saying he does not want the city to become a “running sore.”

President Emmanuel Macron has said he aims to find shelter for all those living rough in France by the end of the year.