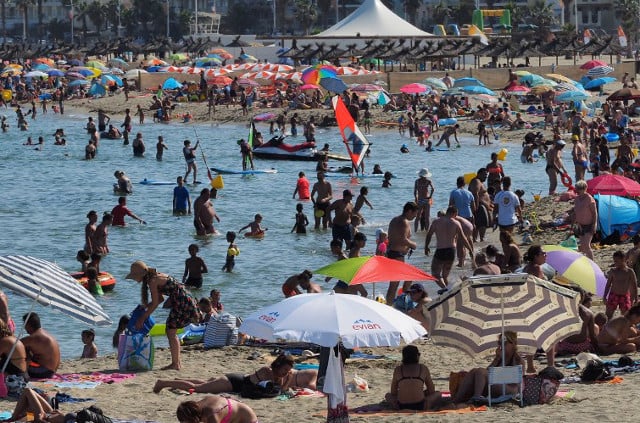 With anarchists in Spain taking to the streets to express their anger at the mass tourism so prevalent across large swathes of the country, could France be hit by the anti-tourism bug next?

The Local recently reported that France's tourism industry has just started recovering after it saw a dip after the 2015 terrorist attacks, attracting almost 83 million visitors in 2016.

This makes it the world's most-visited country.

But with large parts of the country – particularly those areas around the coast – seeing their populations inflate massively over the summer months, how much longer will it be able to cope with the huge numbers flocking to its towns and villages each year? Crowds in Versailles. Deposit Photos
According to the most recent figures from France's number-crunching agency Insee, more than 6,000 towns see their populations more than double during tourist season, causing potential issues from traffic jams and congestion to longer waiting times at doctors' and restaurants.
Numerous towns and villages along the French coast have more than ten times as many beds for tourists as they do inhabitants.
Germ in the Hautes-Pyrénées department has the highest ratio of tourists to residents in France (despite the unfortunate English translation of its name).

Home to just 41 permanent residents, Germ has space to accommodate more than 6,000 visitors in hotels, hostels, and B&Bs.

That means that at full capacity, the town's population is multiplied by more than 150, with 96 percent of all houses in the area second homes.

And it's not only smaller towns feeling the strain of tourism.

In Cannes, for example, the population can triple during the summer, while the 26,000-strong population of Agde can multiple by a factor of nine when all the hotels in the town are full. In the latter, second homes account for 70 percent of all houses in the area.

And evidence that the locals are getting sick of the situation are starting to appear.

In Biarritz on the southwestern coast, stickers urging Parisians to “clear off” were plastered across the town this summer.

With so many dwellings used for tourist purposes – whether by being converted into hotels or rented out via accommodation-sharing sites such as Airbnb – rental prices are being pushed up for locals.

It's this 'Airbnb effect' that has pushed tensions to boiling point in locations such as Venice and Barcelona.

In both those cities, locals have protested for years about being priced out of their homes, prompting authorities to crack down on mass tourism and introduce limits on new tourist accommodations.