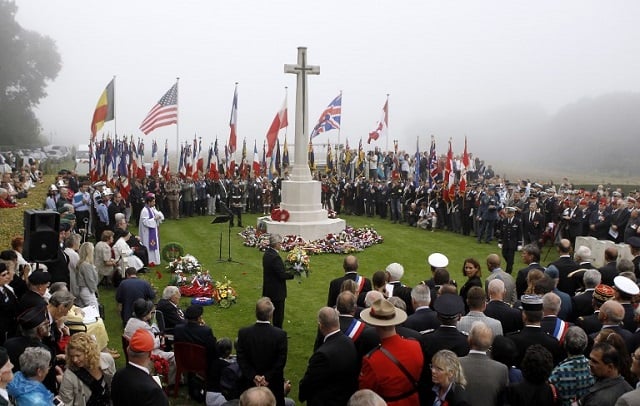 More than a thousand people, led by the French and Canadian ministers for veteran affairs, Genevieve Darrieussecq and Kent Hehr, took part in the 75th anniversary ceremonies, which were held amid tight security, an AFP journalist saw.

The goal of the Dieppe Raid was to carry out a division-sized attack on a Channel port, hold it briefly, destroy facilities and then withdraw.

But the operation, gathering 5,000 largely untested Canadians and a thousand British troops, turned out to be a disaster.

Forewarned by radio traffic as the invading force mustered off the English coast, the Germans cut down the attackers with heavy machine guns, mortars and grenades, and German aircraft dominated the skies.

More than a thousand men in the allied force died, hundreds were injured and more than 2,000 taken prisoner. The German side lost several hundred men.

READ ALSO: D-Day Anniversary: 'Death was all around'

“There were 15 of us in a small boat, they were shooting at us from all sides, and I was wounded by a grenade,” Saskatchewan-born Paul Delorme, one of four veterans of the raid who attended the ceremonies, told AFP.

Delorme spent two years in various prisoner-of-war camps before being sent to work in the German salt mines until he was finally liberated by US forces.

The raid nurtured close ties between Canada and Dieppe, a port that lives on fishing and the cross-Channel ferry industry.

It is enshrined in Canadian history as an episode of great bravery against overwhelming odds.

In the wider tableau of World War II, in which 50 to 80 million people died, Dieppe is often relegated to the status of a footnote.

Historians, though, say it provided crucial lessons for the far-bigger Normandy landings of June 6th, 1944.

Through it, planners became painfully aware of the strength of the so-called Atlantic Wall – the defences against amphibious operations that the Nazis built along the northern and western French coasts after seizing France in 1940.

As a result, the buildup to the Normandy landings was done in great stealth.

As US and Canadian forces mustered in southern England, Britain ran one of the most successful deception operations in military history, tricking the Germans into believing the landings would take place in Norway and in the Pas-de-Calais region on France's Channel Coast.

Troops who hit the beaches in Normandy were supported by overwhelming air superiority and gunfire from battleships, and by inventions to bridge ditches, destroy defensive emplacements, provide an emergency port and even a cross-Channel fuel pipeline.

READ ALSO: D-Day anniversary: 'I didn't have a gun'