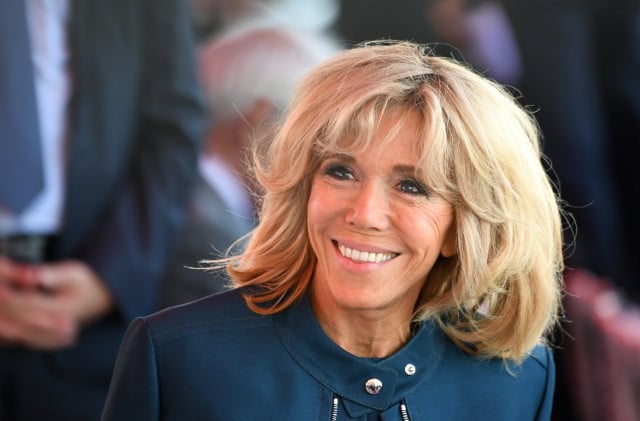 Photo: AFP
In extracts of an interview with Elle magazine – her first interview with the press since entering the Élysée, due to be released in the August 18th edition – Brigitte Macron says “the French will know exactly what I'm doing”.
The words come after last week's controversy over the role of France's 'first lady', which has proved to be something of a political headache for French President Emmanuel Macron and his wife Brigitte.
In her interview with Elle magazine, Brigitte makes it clear that her role will be an informal one.
“It will be decided, not by a law, but by issuing a 'transparency charter' showing that I am not paid, by laying out exactly what my tasks are and how I am going about them.”
READ ALSO: Photo: AFP
“On the Élysée website, my meetings and appointments will be available so that the French know exactly what I am doing. What's important is that everything is clear: like those that have gone before me, I will take up my public role but the French will know what means are available to me.”
The point is a pertinent one. In a petition against the creation of an official 'first lady' role for the president's wife that garnered over 200,000 signatures last week, it said: “Brigitte Macron currently has a team of two or three aides, as well as two secretaries and two security agents. That's enough”.
In her interview with Elle, Brigitte also directly addresses the 25-year age gap between her and her husband, which has attracted so much attention since they first entered the public spotlight. She claims that her husband's only fault is that “he is younger than I am.”

However she goes on to praise her husband, saying, “With Emmanuel, I am very used to extraordinary things happening to me and I always wonder what the next adventure will be. And this has lasted 20 years.
“When I read things about us as a couple, I always feel like I'm reading someone else's story. But our story is so simple.”
She goes on to say that if she hadn't made the choice to be with Macron, she would have “let life pass me by”.
Known for her interest in women's rights, Brigitte went on to say: “I think that the 21st century will be female, that these are the women that can, maybe, find a way through this world.”
She also reveals that during the election campaign, she was only truly worried on one evening, that of the second round of the election.
“Many people mistakenly thought that after the first round, we thought it was won. We never thought that. Especially since I’m not one for anticipation; for me, a thing exists only when it arrives, not before.”
Url copied to clipboard!