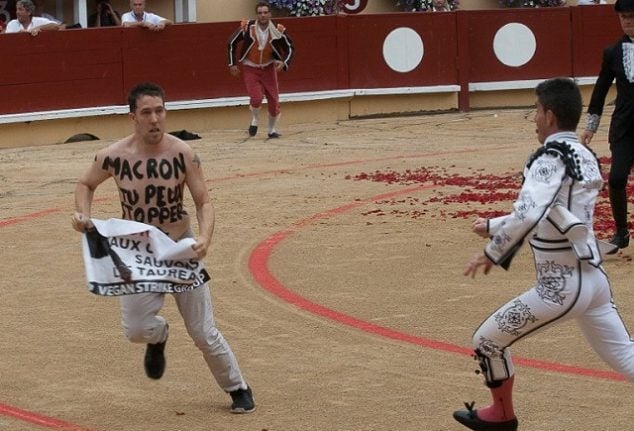 The protester enters the ring with slogans written on his torso. Photo: Daniel Velez/AFP

After jumping into the arena, the protester revealed slogans written on his torso, which were directed at French President Emmanuel Macron.

'Macron, you can stop this,' read the writing on his chest, while he carried a sign saying 'No to the Corrida, save the bulls – Vegan strike group'.

The protester shouted slogans including “Macron, are these our traditions?” and “Do not confuse barbarism with tradition”.

Protest organization Vegan Strike Group said in a statement that his aim was to “call on the President of the Republic directly to implement the abolition of bullfighting”.

The group wanted to share a message of “anti-speciesism”, it said, and to call for animals' lives to be given the same respect as humans'.

The protester's action was met with boos from the crowd, according to Le Monde, and he was taken into police custody before being released shortly afterwards.

The daily identified the activist as a 34-year-old Dutchman who has jumped into a total of more than 30 bullrings and dolphinariums in France and abroad to protest animal cruelty.

A few days earlier, together with two other activists from the same group, the man had entered the arena of a bullring in Dax in the south of France.

The five-day Bayonne Festival attracts around 1 million visitors each year, but has long faced backlash for the prominent bullfighting in the event.

One of the leading anti-bullfighting campaign groups, CRAC Europe (The Radical Committee Against Corrida) organizes regular protests against festivals which feature the sport.

“Bullfighting in general is perverse, it's sadism, and it's incredible that in the 21st century there is still entertainment based on stabbing animals to death,” the group's vice president, Roger Lahana, told The Local last year. 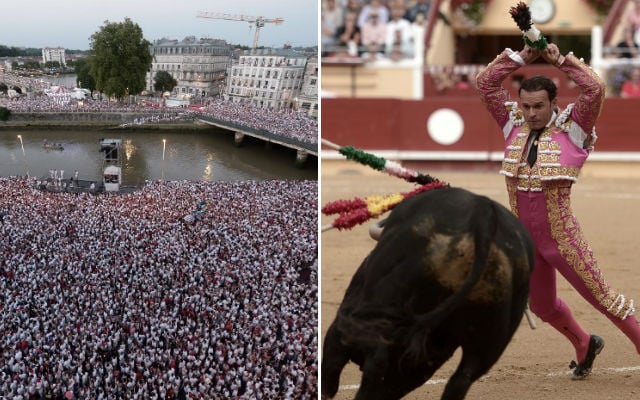 BULLFIGHTING
Bullfighting: Should you really go to the Bayonne Festival?
Url copied to clipboard!