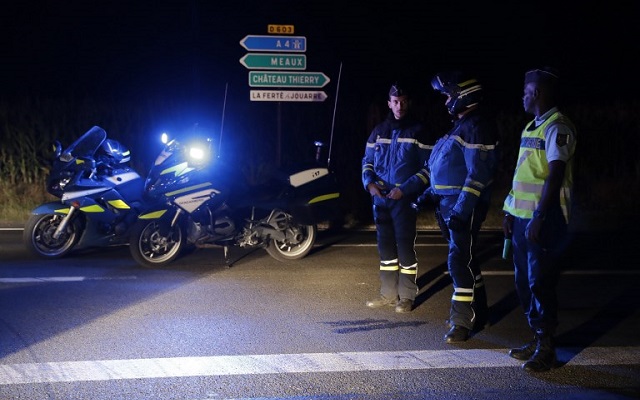 Police block a road near the site of the attack. Photo: Thomas Samson/AFP

The episode came just five days after a terror-linked car attack on soldiers, the latest assault in France since early 2015.

Investigators have “ruled out the terrorist hypothesis” behind the latest incident, which took place in the town of Sept-Sorts, 55 kilometres (34 miles) east of Paris, a source close to the inquiry said.

LATEST: Car ramming at French restaurant: What we know so far

The man, who was arrested, said “he had tried to kill himself yesterday (Sunday) without success and decided to try again this way,” the source said.

The public prosecutor's office in the town of Meaux also ruled out terrorism.

“There is no doubt he did this voluntarily,” said deputy prosecutor Eric de Valroger, adding it was “highly likely” the driver was under the influence.

In Paris, interior ministry spokesman Pierre-Henry Brandet said the fatality was a girl aged 13, and not aged eight as initially reported.

Four people were seriously hurt, after a preliminary figure had been given of six.

The driver, born in 1985, “is not known to the intelligence services and has no criminal record,” Brandet said.

One of the four injured was the girl's younger brother, police said.

French President Emmanuel Macron sent his condolences, tweeting with the hashtag #SeptSorts that his thoughts were with the victims and their loved ones.

France is on edge after suffering a series terror-related attacks, including the use of cars as weapons.

On August 9th, six soldiers were injured after they were hit by a rented BMW in the western Paris suburb of Levallois-Perret. The suspect, a 36-year-old Algerian man, was later shot and wounded after a dramatic motorway chase.

A BMW was also involved in Monday's incident.

The death toll from jihadist attacks in France has exceeded 230 since January 2015.

The country has been under a state of emergency since the Islamic State group attacked in Paris in November 2015, leaving 130 people dead.