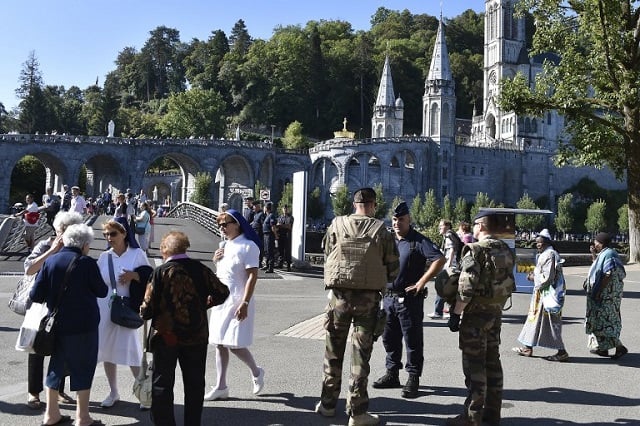 Worshippers can expect bag searches, traffic controls, and increased numbers of police officers on duty in the run-up to the Feast of the Assumption on August 15th, a key date in the Catholic calendar.

Lourdes is one of the world's most important sites for religious tourism, with the shrine marking the spot where the Virgin Mary is said to have appeared in a grotto to Bernadette Soubirous, a poor shepherd girl, in 1858.

Pilgrims started arriving at the south-western town over the weekend, flocking to the sanctuary in the foothills of the Pyrenees for a mass and procession to celebrate the ascent of the Virgin Mary into Heaven.

Security was significantly heightened for the event in 2016, when it fell less than one month after the murder of a priest by two terrorists in his Normandy church.

And this year the extra measures will be in place once again.

Authorities stressed they had no knowledge of a particular threat to the site or the festival, but Béatrice Lagarde, the prefect of the Hautes-Pyrénees département, told local media that “there is no reason to downgrade the security system put in place last year”.

“We are taking into account that the national threat remains at a high level,” said Lagarde at a press conference outlining the measures.

Police presence has been reinforced, with an additional 300 police officers and soldiers deployed. That includes a team of 30 within the sanctuary itself, police dogs, and explosives specialists.

A further aerial team will also monitor the situation at the site from a police plane, as well as ensuring that bans on drones in the area were adhered to. A network of 30 cameras in the religious site and the city will allow further monitoring in real time.

The municipality has worked on traffic controls, aimed both at reducing congestion and crowding and guarding against possible attacks using a vehicle, such as the horrific truck attack on the Nice promenade in July 2016. The site will be pedestrianized thanks to a system of retractable bollards.

Just three of the 12 entrances to the sanctuary will be accessible, with anyone entering the site subject to bag searches. Additionally, authorities have banned processions outside the site from between midnight and 6am.

Christian sites of worship and areas popular with tourists are both considered to be potential targets for attacks on France, which has suffered a series of deadly attacks over the past two years.

Most recently, a man was arrested after using a vehicle to ram into a group of anti-terror soldiers in the northwestern suburbs of Paris, injuring six.