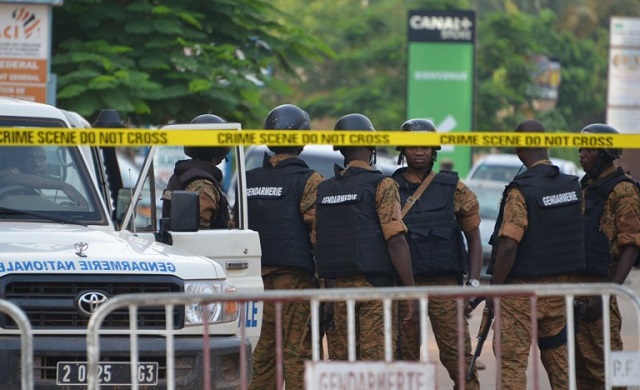 The prosecutors' anti-terrorism unit has opened an investigation, they said.

French President Emmanuel Macron condemned the overnight assault by presumed jihadists on a Turkish restaurant in Ouagadougou, calling it a “terrorist attack”.

Macron, in a statement, also praised the “effective mobilization” of the Burkina security forces in ending the assault, which left at least 18 dead in total, including both Burkinabes and foreigners.

Two assailants were also killed by security forces who launched a counter-assault following Sunday night's attack on the restaurant popular with foreigners, Communications Minister Remis Dandjinou said. It was not clear how many gunmen were involved.

The security operation “has ended” but searches are continuing in buildings in the Ouagadougou neighbourhood around the restaurant, Dandjinou told a press briefing early on Monday.

Macron and his counterpart in the former French colony, Roch Marc Christian Kabore, will discuss the situation later on Monday, his office said in a statement.

France remains committed to pursuing the fight against terrorist groups in west Africa and accelerating work to set up a planned Sahel force to fight jihadists, the statement said.

Macron visited the region in early July, when he said he wanted the force, which will initially count some 5,000 troops and begin its operations in Mali, Burkina Faso and Niger, to be operational by the end of August.

The restaurant targeted on Sunday night is just 200 metres (yards) from a hotel and cafe targeted in an assault in January 2016 that left 30 people dead and 71 wounded, many of them foreigners. That attack was claimed by the Al-Qaeda in the Islamic Maghreb (AQIM) group.