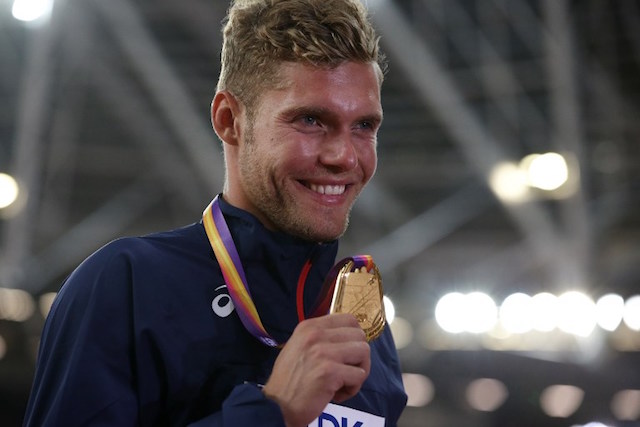 Kevin Mayer poses on the podium during the victory ceremony for the men's decathlon athletics event at London Stadium. Photo: Daniel Leal-Olivas/AFP
Mayer amassed a total of 8,768 points from the 10 disciplines in the gruelling two-day event.
Germany's Rico Freimuth took silver with 8,564 while teammate Kai Kazmirek claimed bronze (8,488). 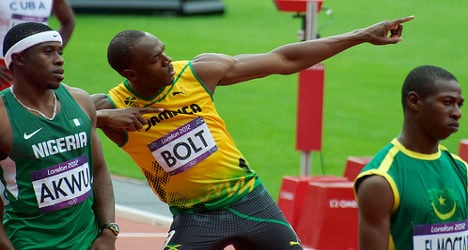 Usain Bolt will set the track alight in Paris in July as well as burn a hole in the pocket of the French sports authorities. Photo: Nick J Webb

Olympic sprint champion Usain Bolt will appear in Paris this summer where he is expected to set the track alight as well as burn a whole in the pockets of event organisers.

"With Bolt, we know that we will easily fill the Stade de France." said the head of the meeting, Laurent Boquillet, adding that organisers had shelled out €229,000 ($300,000) to bring the Jamaican track king to the French capital on July 6.

Bolt, 26, won 100m, 200m and 4x100m relay gold at last year's Olympics in London, repeating the feat that he first achieved in Beijing four years earlier and cementing his reputation as the greatest sprinter of all time.

Boquillet said the fee was standard for a runner of Bolt's calibre, pointing out that before his Olympic triple feat last year, he was available for $250,000 per meeting.

The Paris Diamond league meeting is the ninth on the main athletics circuit.