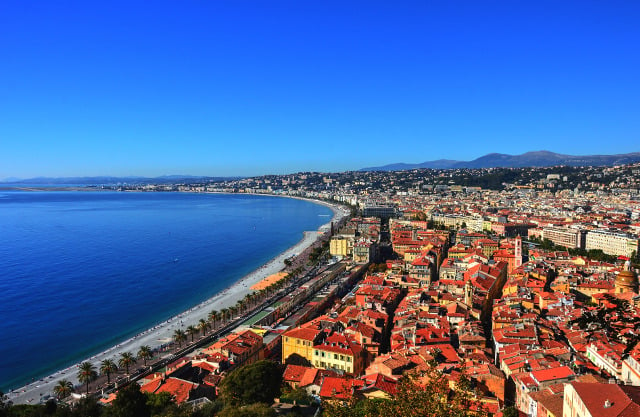 The postcard showed a photo of Promenade des Anglais (above) in Nice. Pixabay/Wikicommons
It was a local postal worker in the Breton town of Lorient who realized what had happened when, noticing that the name of the addressee didn't correspond with the address on her route, she came across the surprising postmark.
The postcard had taken 43 years to travel the 1,300km from Nice on the French Riviera to Brittany in northwest France.
“I wasn't paying attention. I'd taken it with me but when I got to the address, I noticed that the name didn't match the address,” she told French newspaper Ouest France.
Addressed to Raymond Côtard living at 5, Rue Jules Legrand, the front of the postcard shows a photo of the famed Promenade des Anglais in Nice.
While on the reverse is a message typical of the kind found on thousands of postcards. Lorient in Brittany (1) and Nice on the French RIviera (2)
“Dear Raymond, After several traffic jams, we have finally joined Marie-Louise and Raymond, who we came to have lunch with at their house. We're leaving Nice tomorrow to go to Menton for a week.”
The only problem is that Raymond Côtard can't be tracked down.
“I looked a bit. I asked the old owner of the bar opposite the address but it didn't ring any bells for him,” the postal worker said.
And local authorities have no record of Raymond Côtard either. “I'm going to continue my search. If I don't find anything, I'll keep it as a souvenir,” she smiled.
But she can't quite explain why it turned up so late.
“Was it found by someone who then put it in the postbox? Was it found hidden in a corner in a post office in Nice during a clean? I'm not sure..”.
And it looks like it's destined to remain a mystery for some time, with no ongoing investigation to find out the cause of the delay.
“It's amazing…But we see stranger things at the postal service,” she said.
Url copied to clipboard!