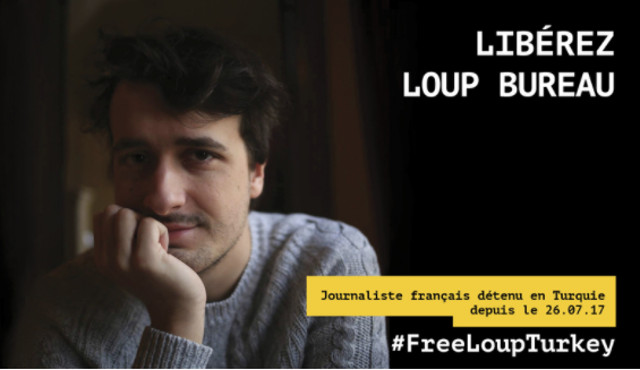 Free Loup Bureau/Change.org
Loup Bureau, 27, is the latest foreign reporter to run into trouble in the country following a series of arrests that have strained ties between Ankara and its European allies and raised alarm about press freedom.
Bureau was detained on Turkey-Iraq border and a Turkish security source said photographs of the journalist with fighters of the Kurdish People's Protection Units (YPG) were found on his laptop.
These date from a report he filed to French channel TV5 in 2013.
Turkey considers the YPG as the Syrian arm of the outlawed Kurdistan Workers Party (PKK), which has waged an insurgency against the Turkish state for more than three decades.
Bureau is being held in the town of Sirnak, near the border with Iraq, but his lawyer Martin Pradel said Tuesday that authorities were planning to transfer him to a prison in Van, nine hours away by car, in a decision he called “scandalous”.
The transfer will “have a disastrous effect,” Pradel said, noting that Bureau's Turkish lawyer currently sees him every other day.
French journalist unions, European and international journalist associations, Reporters Without Borders (RSF), as well as TV5 are calling for Bureau's immediate release along with his family and lawyers.
Some 3,500 people have joined a Facebook page set up by the journalist's family with the headline “Loup Bureau, Journalist, not Terrorist”, while an online petition had garnered some 16,500 signatures by Wednesday afternoon.
His arrest came amid growing alarm over press freedom in Turkey, where scores of Turkish journalists have been jailed since an attempted coup in July 2016.
Foreign reporters seeking to cover the PKK or the YPG have repeatedly faced charges of supporting terrorist groups.
So far the French foreign ministry has said only that Paris was following the situation with the “greatest attention” and was seeking consular access in Turkey.
'Imposing wall of silence'
Bureau, who is studying for a master's degree in journalism, is scheduled to defend his thesis in September, according to RSF.
Speaking to the French daily Liberation, a friend described the native of France's western Brittany region as “an adventurer who is not afraid of going to conflict zones”.
Bureau, who speaks Arabic, has reported on the Taliban in Pakistan, on Ukraine's Maidan uprising in 2014 and the 2011 Egyptian revolution.
Pradel and another lawyer for Bureau, Rusen Aytac, voiced concern over the “extremely summary nature” of the arrest on suspicion of belonging to “an armed terrorist organisation” because of the 2013 reporting trip.
The journalism groups said in a statement: “It's clear that the Turkish leaders beginning with President (Recep Tayyip) Erdogan abhor over-curious foreign journalists and do not hesitate to arrest them to impose a wall of silence over the reality of this country, which is the biggest prison in the world for journalists.”
According to the P24 press freedom website, 162 journalists are behind bars in Turkey.
Bureau is the third French journalist to be detained in Turkey in the past year.
In June, Turkey deported French photojournalist Mathias Depardon after holding him for a month on charges of supporting terror groups.
Another French reporter, Olivier Bertrand, was expelled in November 2016.
But Deniz Yucel, a correspondent of German daily Die Welt, has been held since February, personally accused by Erdogan of working as a “terror agent”.
And Sweden just announced Tuesday that it was working to help a Swedish-Turkish journalist detained in Spain after Ankara issued an international arrest warrant accusing him of “terrorism”.