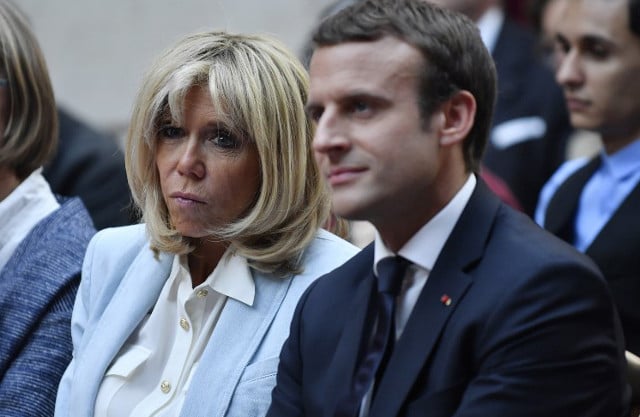 AFP
The newly elected 39-year-old president had promised in March on the campaign trail to create “a real status” for his wife Brigitte, who is his former school teacher.
The issue has become a new political headache for Macron after an online petition against creating the role garnered more than 200,000 signatures and a poll showed a majority of French people were also opposed.
The presidency will clarify Brigitte Macron's position in the coming days, a source told AFP late on Monday, adding that there were would be no change to the constitution to create a new First Lady position.
READ ALSO: AFP
Instead, the presidency will clarify Brigitte Macron's resources and make public the cost to the public purse, the source and the BFM news channel said.
The new status would have seen France copy the American system of having a President and First Lady roles. Neither country has ever had a female head of state.
'Responsibilities'
The wife of the French president has historically always played a public role at official functions and has a small security and secretarial staff. But she has no formal job title, like the partners of the British prime minister or German chancellor.
“Brigitte Macron plays a role, has responsibilities,” government spokesman Christophe Castaner wrote on Twitter. “We want transparency and to make clear the resources at her disposal.”
The focus on the First Lady proposition comes at a bad time for Macron as polls show his popularity slipping badly only three months after the young centrist clinched a sensational victory in May.
One poll published last week showed just 36 percent of respondents held a positive view of him.
Parliament is also preparing to vote for a new ethics law on Wednesday which will prevent MPs from employing their partners or family members as assistants after a series of scandals.
Macron had always made clear that Brigitte would not be paid in the proposed role as First Lady.
“Paid by the Republic, no. Having a role, a real status, a real capacity to act, yes,” Macron said in March when asked about his vision for the future position on RTL radio.
Brigitte would “have the role that she's always had. That's to say that she is at my side because it balances me. We've always worked like that,” he added.
“She will have a role, she won't be hidden because she's part of my life,” he explained.
Brigitte Macron, who is 25 years older than her husband at age 64, married her former pupil after they fell in love while writing a play together at school.
Reports say she is preparing to take an active role supporting mental health and handicap charities.