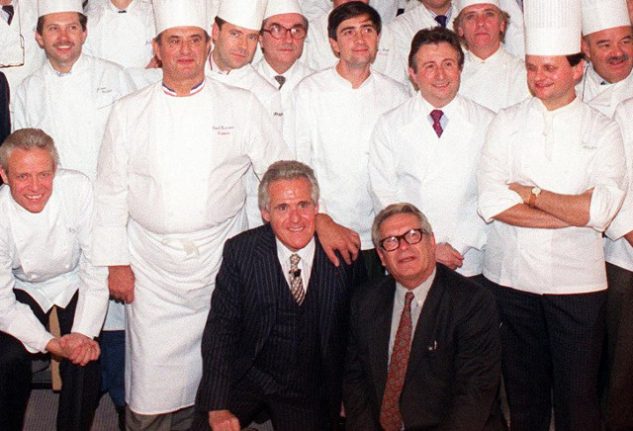 Christian Millau (L) and Henri Gault (R). Photo: AFP
The French food critic Christian Millau, who whetted the world's appetite for nouvelle cuisine, has died aged 88, his friends said Monday.
The journalist, who launched the famed Gault & Millau guide in 1969 with his late colleague Henri Gault, helped bring together the movement of young French chefs developing lighter more visual dishes that altered restaurant menus forever.
The guide's director Come de Cherisey told AFP that Millau helped change food culture across the world and championed chefs now seen as some of the world's best.
“He revolutionised the world of gastronomy by supporting chefs he discovered like Joel Robuchon and Michel Guerard. He was also close to Paul Bocuse and helped launch nouvelle cuisine in 1973,” he added.
The nouvelle cuisine — or “new cooking” — movement was a reaction to the supposed fussy complications and rich sauces of classic French cuisine, which relied heavily on butter and cream.
Instead its supporters, led by Millau and Gault — who coined the term — advocated lighter meals and shorter more health-conscious menus.
They urged chefs to be more inventive both visually and in the ingredients they used, insisting on freshness and lightness.
“These new nouvelle cuisine commandments were a big bang at the time,” Cherisey insisted. “Everything then was very traditional, and there was not the same emphasis on the artistry of the chefs. Sauces were heavy and meats gamey.”
Gilles Pudlowski, of the rival French Pudlo guide, was among the first to pay tribute to Millau. “Christian Millau is not dead, he is eternal. Dear Christian, what would I be without you?”
The Gault & Millau guide is seen as second only in influence to the Michelin, and is distributed in 12 countries.
Url copied to clipboard!