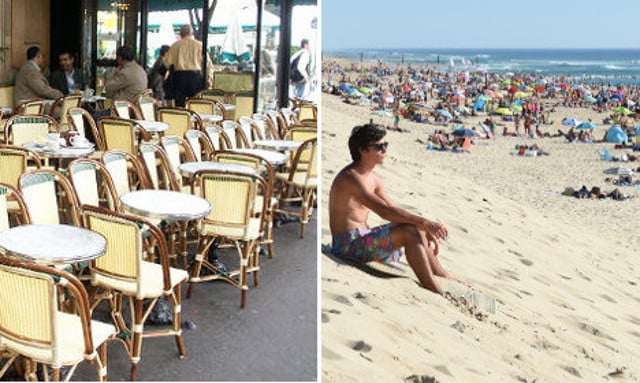 Photo: AFP
Why Paris is awful in August
Weather
Why would you want to stay in Paris when it's so hot? You get the nasty one-two punch of stifling heat and suffocating humidity.
After all, why would you want to sweat on the metro when you can sweat at the beach?
And with so many buildings in Paris lacking air conditioning, many would argue that it's the perfect time to seek the sea. People sit beside a fountain in the Palais Royal gardens. Photo: AFP
The tourist influx
One of the worst things about Paris in August is that it is rammed with tourists.
Those who stay inevitably find themselves stuck behind map-gazing foreigners who stand on the wrong side of the escalators and stop in the middle of the footpath to take a picture of a road sign (how quaint, they think). Shoppers on Champs-Élysées in central Paris. Photo: Sacratomato/Flickr
Your friends are all gone
Sure, there are tourists, but where are your friends?
When you're stuck in Paris, you can forget organizing any kind of party or gathering because there'll be no one in the city to come.
What's worse, when you text a friend to suggest an apéro, you'll be stung with a pang of jealousy when they respond, “I'm on the Riveria, see you in three weeks”. Why Paris is awesome in August
Prime people watching
With the City of Light drawing people from everywhere in August you get a sample of the world’s cultures delivered to your doorstep.
August is decidedly peak season for people watching.
Extra space
Think of everything in Paris that you can't do at other times of the year — get a seat on a terrace, get a seat on the metro, find a bit of green space in a park… the list is endless.
And in August you can do all these things – not to mention enjoy the empty roads for some prime Velib' riding. Pure bliss. A row full of Velibs. Photo: RubyGoes/Flickr
The Paris Plages
During Paris Plages, you can enjoy cool lawns, sun umbrellas, deckchairs and palm trees along the River Seine!
This year, you can even take advantage of the new swimming pools at Bassin de la Villette in the city's trendy 19th arrondissement.
And even though it might not feel like the real thing, at least you've got absolutely no chance of getting attacked by a horrible jellyfish, like you might on the Riviera.

Photo: AFP
The boss is gone
Some may complain about having to work while everyone else is away, but they miss the point.
In August, your boss is likely to be on beach, your colleagues too, so you can get away with doing pretty much 'rien'! Empty office? Take advantage of it. Photo: Cold Storage/Flickr
New friendships
Sure, most of your good friends are gone, but this opens up a unique opportunity to hang out with some of the other “stayers” who you might not usually spend time with.
You'll learn pretty quickly who's left in Paris, and if that means extending your circle of friends then embrace the chance and see the benefits of a revitalised friendship group come September.