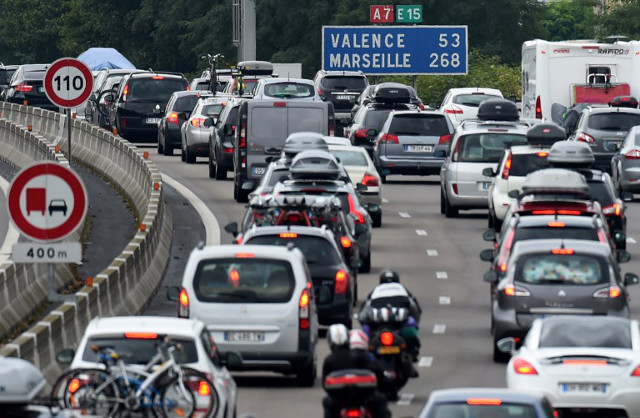 Photo: AFP
Holidaymakers in France are being advised to delay their journeys on Saturday or risk being caught up in the severe traffic jams.
Bison Futé, the government-run site that monitors traffic levels, is predicting that traffic on Saturday will be “exceptionally difficult” as people who traditionally take their summer holiday in July (known as “juilletistes”) return home while those who favour August for the summer breaks (“aoûtiens“) depart.
“Saturday July 29th will be one of the most difficult days for traffic of summer 2017,” announced Bison Futé on Wednesday.
The organization is advising people to avoid hitting the roads on the way out of France's major cities in the early hours of Saturday morning and throughout the day, with congestion expected from 4am on Saturday morning to 8pm in the evening.
READ ALSO: Image: Bison Futé
Traffic is expected to start building up on the A10 between Orléans in north central France and Bordeaux in the south west, on the A6 to the north of Lyon, around the toll booths of Villefranche-sur-Saône (25km north of Lyon) and on the A7 between Lyon and Orange in southeastern France.
For those returning to the country's metropolitan areas, Saturday is classed as orange, meaning traffic will be “difficult” across the whole of France, except around the Mediterranean which is classed as red, the second highest warning, meaning travelling on roads out of all large French cities in that area will be “very difficult”.
For this reason, Bison Futé is recommending people steer clear of the major roads between 2pm and 6pm.
Friday and Sunday are classed as orange for those heading on holiday and green (meaning traffic will be normal) for those returning, except in the central eastern region of Auvergne-Rhône-Alpes and around the Mediterranean on Sunday where traffic is expected to be difficult (orange).
Bison Futé advises motorists to avoid major roads between 9am and 3pm.
And July 29th isn't the only so-called 'black' day for driving motorists can expect this summer.
Others include Saturday August 5th in the Rhône-Alpes-Auvergne area on the roads heading out of cities.
And August 12th has also been ranked as a 'black' day in the Rhône-Alpes-Auvergne area as well as in the south of France and France's Mediterranean coast, which see huge numbers of Italian and Spanish holidaymakers driving to the region each summer.