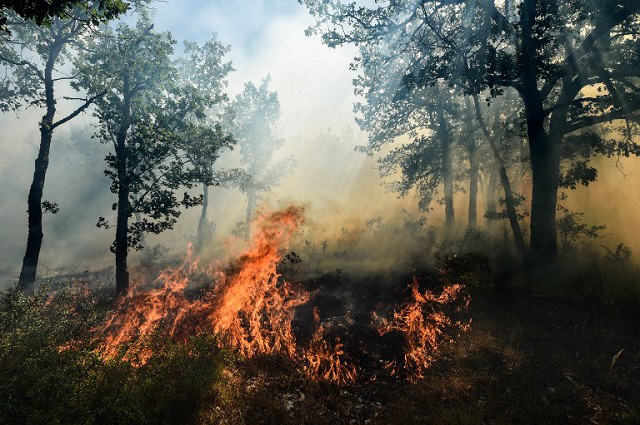 All photos: AFP
As 4,000 firefighters and troops backed by 19 water bombers were mobilised in order to defeat the flames caused by a dangerous mix of strong winds and dry brush, 10,000 people, including holidaymakers, were evacuated after a new wild fire broke out in southern France on Tuesday night.
Here's a selection of the most dramatic images from the wildfires currently raging in France.
READ MORE: A firefighter comforts a woman as they stand amid debris in Bormes-les-Mimosas, southeastern France. A fire burning the forest by the beach in Bormes-les-Mimosas. Firefighters work to put out a fire in Corsica. Smoke from a fire billows over Carros, southeastern France. A tree burns as smoke from a fire billows near Mirabeau, southeastern France. A fire-fighting Canadair aircraft drops water over a fire. A damaged road sign in Carros, where a fire destroyed hectares of vegetation. Firefighters work in a burnt-out house. Trees left burned by the fires in the south east of the country. A fire burns in Artigues as the blazes continued to ravage southeastern France on Tuesday. Firefighters have been mobilized across the country. People enjoy the beach during a forest fire in La Croix-Valmer, near Saint-Tropez. A Canadair drops water on the blaze in La Croix-Valmer. Smoke billows from a forest in Ortale de Biguglia on the French island of Corsica. Fire burning in the Corsican forest. Dozens of firefighters battled to put out the blaze in Corsica. Smoke rising from the fire near Biguglia on Tuesday.