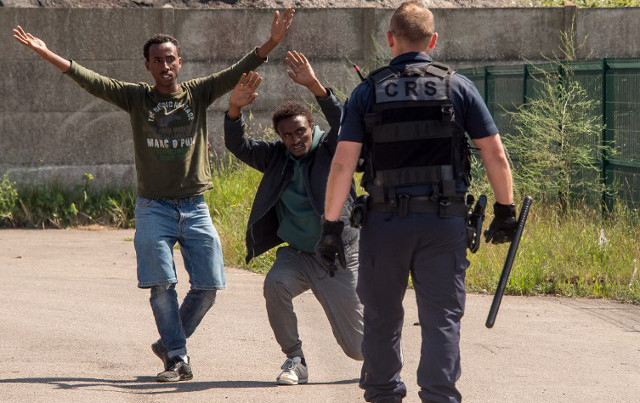 Photo: AFP
French police are regularly using pepper spray against migrants in Calais, Human Rights Watch (HRW) said Wednesday, an accusation denied by authorities.
In a report entitled “Like living in hell” the use of pepper spray against migrants massed in the northern coastal city is described as “routine”.
“Police use of pepper spray in Calais is so common that many asylum seekers and migrants had difficulty recalling precisely how many times they had been sprayed,” the report said.
Of 61 migrants questioned by the prominent international human rights group between the end of June and the beginning of July, 55 said they had been sprayed during the two weeks before the interview, and some said they had been sprayed every day, the author of the report, Michael Garcia Bochenek, told AFP.
READ ALSO: “The 55 were sprayed while they slept,” he said, adding that he had talked to groups of varying nationalities in different locations, but the similarity of their stories “shows there is a serious problem”.
“These are practices that have become routine, without there being any consequences, and that is when they become serious abuses,” HRW France Director Benedicte Jeannerod told AFP.
For more than a decade France's northern coast has been a magnet for refugees and migrants trying to reach Britain.
In October last year Calais' notorious makeshift camp, nicknamed “the Jungle”, where thousands lived in the hope of climbing aboard trucks or trains to get across the Channel, was dismantled.
But HRW said hundreds of asylum seekers and migrants, mostly Eritreans, Ethiopians and Afghans, are still living on the streets and in wooded areas in
and around the port city.
“Every day, the police chase us. They use spray. They kick us. This is our life every day,” said Waysira L, a 16-year-old boy from the Oromo community, an ethnic group in east Africa.
Fabien Sudry, prefect for the Pas-de-Calais region, “categorically denied the false and defamatory allegations” in the report, which he said “have no evidential basis”.
“Police of course operate in Calais respecting the rules of law, with the sole objective of ensuring public order and security,” Sudry added.
“This is a prosecution case,” said David Michaux, national delegate for the  UNSA police union.