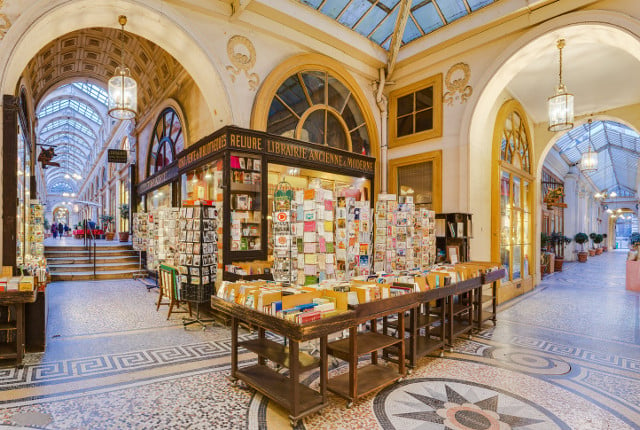 One of the covered passages in Paris. Photo: blieusong/Flickr
How well do you know Paris?
American tour guide Corey Frye was put on the spot to give his top tip for each of the 20 arrondissements in Paris.
Here's what he had to offer. (Click here to hear the full interview)
1st arrondissement: Head inside the Louvre
You'd be hard pressed to find more beautiful building interiors – forget about the permanent collection.
2nd arrondissement: Wander through the Galerie Vivienne (also pictured above)
These are some of the best hidden gems of Paris. There used to be up to 150 covered passages in the golden age in the 19th century, now there are about a dozen.
Photo: Mu/WikiCommons
3rd arrondissement: Eat at Le Marché des Enfants Rouges
It's a beautiful market that's very local, with all kinds of international dishes. You can't go wrong for Lebanese or Middle Eastern food.
4th arrondissement: Go inside the Saint-Paul-Saint-Louis church
This church, right next to the Saint-Paul Metro stop, is a treasure trove of little historical details.
Photo: Sailko/WikiCommons
5th arrondissement: See the Roman ruins
The old bath houses next to the Cluny museum are fantastic and they're about 1900 years old. You've gotta check them out. Photo: Checco/WikiCommons
7th arrondissement: Take in La Fontaine de Mars
It's a beautiful little fountain on Rue Saint-Dominique dedicated to Mars, the god of war. And it's just down the road from the Eiffel Tower. Can't find it? It's right night to a cafe of the same name. A picture of the fountain on a 1910 postcard. Photo: Siren-Com/WikiCommons
8th arrondissement: Find the hidden café at the Petit Palais
A lot of people don't know that entry is free, and the trick here is to go into the interior courtyard where's a great little café. It's one of my best unknown coffee hotspots in Paris. Photo: Patrick Giraud/WikiCommons
9th arrondissement: Visit the Opera house
It's only €11 to get in and you're free to roam about. You've got chandeliers, painted ceilings, marble staircases, and the origins of the Phantom of the Opera.
10th arrondissement: Stroll along the Canal Saint-Martin
It's always described as up and coming, but it has arrived now. Have a coffee at Ten Belles cafe. Photo: Geoffroy/WikiCommons
11th arrondissement: Have a coffee at the cat café (Cafe des chats)
A new one in Bastille. It's a working café with house cats, you have your coffee and a crumpet with little cats playing around. It's great for families bringing kids to Paris.
12th arrondissement: Walk the Promenade plantée
Former elevated railway track that's now a walk stretching out into the 12th – and no tourists ever find it. It's very nice for a date.
Photo: Advencap/WikiCommons
13th arrondissement: Eat Chinese food at Chinatown
Head to the south eastern part of the 13th for the best Chinese food in town, it's fantastic.
14th arrondissement: Head into Catacombs
You've got to do the catacombs. When you pay as a tourist there's a mile's worth of tunnels – but there's actually around 200 miles around Paris. Photo: AFP
15th arrondissement: Check out the Unesco Building
The headquarters of Unesco has beautiful gardens and impressive architecture – and a lot of people don't realize it. Ok, the building is technically on the border of the 15th and 7th, but that doesn't mean you should miss it!
16th arrondissement: Enjoy Hector Guimard's architecture
Guimard did all art nouveau, cast iron Metro stations. He was prolific for his buildings in the 16th, wander around and check out his art nouveau architecture. Start with Castel Béranger.
17th arrondissement: Take a stroll at Parc Monceau
It's such a local park, and it's so clean and full of families. It's extraordinary. Photo: Daderot/WikiCommons
18th arrondissement: See Picasso's old studio
You can stand in front of Le Bateau-Lavoir and know that Picasso's artistic career started there. You can't go inside, but you can stand in a cute little square out front and contemplate being in the same place that one of the greats made his mark. Photo: Davequ/WikiCommons
19th arrondissement: Experience the Bassin de la Villette
Check out the boats anchored on the canal there, the “péniches”, some of which are restaurants, cafes, some are bookshops, just walk up and down along the waterside.
20th arrondissement: Take in the Père Lachaise cemetery
It's like an outdoor sculpture gallery over 100 acres. You'll see all the famous tombs – Oscar Wilde, Jim Morrisson, Edith Piaf – but it's like a park too. Some people call it the 21st arrondissement.

Here's a map of all the attractions: Find out more about Corey's tours via his site: A French Frye in Paris. Listen to his full interview below, and click here for more from the Earful Tower radio show.