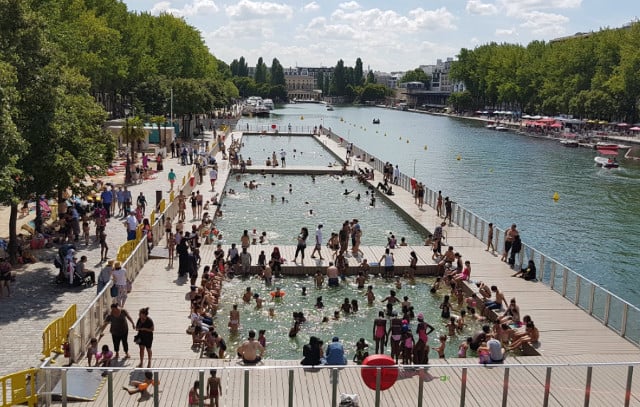 The City of Paris tweeted that three floating pools on the Canal de l'Ourcq were closed on Monday because the water quality was “unsatisfactory”.
The authorities have since said the pool will re-open on Tuesday.
The cause of the pollution was not clear.
French radio said heavy rainfall over the weekend had led to higher than normal levels of enterococci, a bacteria found in fecal matter.
READ ALSO: The pools, which can take up to 300 bathers at a time, are the culmination of a 10-year effort by the City of Paris to purify the canal water so that those who cannot afford a seaside holiday can still take the plunge.

With temperatures last week rising well above 30 degrees Celsius (86 degrees Fahrenheit), they proved an instant hit as hundreds of people queued on the first day for a dip.
Inaugurating the facility, Mayor Anne Hidalgo called it “a dream come true”.
But for most Parisians, being able to swim in the Seine river, past the Eiffel Tower, represents the ultimate prize.
Hidalgo has set a target of 2024, when the city hopes to host the summer Olympics, to have bathers bobbing in the Seine.
DROWN
Firemen save boy: parents sue for damages

The fire service in the Alpes Maritime region is being sued after the family received a quote of €1,146 to repair the pool.

In August this year, the three and a half-year-old was paddling in the pool of the family's holiday home in Golfe-Juan when his arm got stuck in an air vent.

His parents, unable to turn off the vent, called the fire service, who broke through the side of the pool to free him.

The parents say the legal process is part of the procedure of claiming the damages on insurance.