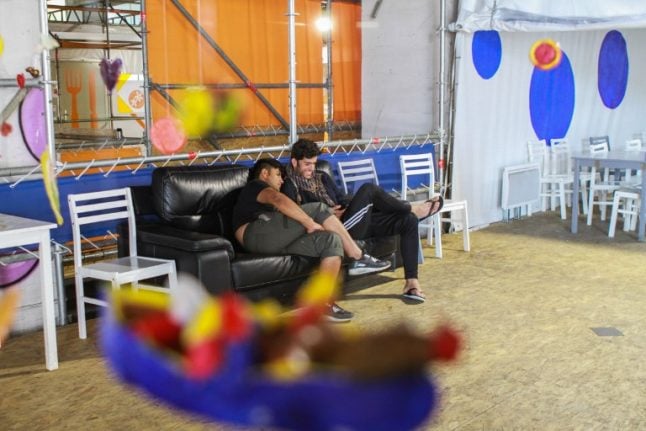 Migrants look at a smartphone in a humanitarian reception centre for migrants at La Chapelle in Paris on Friday. Photo: Stringer/AFP
Former government minister Jacques Toubon, the head of the Defenseur des Droits (Protector of Rights) body, made the claim as he visited a humanitarian centre for migrants in the La Chapelle area of northern Paris.
More than 2,800 people were evacuated earlier this month from a makeshift camp that sprung up around the centre, but a new camp is already forming.
French authorities have cleared makeshift migrant tent camps in Paris more than 30 times since 2015.
President Emmanuel Macron's government last week announced plans to create more than 12,000 places in reception centres for asylum seekers and refugees by 2019.
The numbers of refugees and migrants converging on Paris has increased since the closure last October of the sprawling migrant camp in the northern French port of Calais known as the “Jungle”.
Thousands of migrants had made their home in the Calais camp in the hope of stowing away on trucks crossing the Channel to Britain.
READ ALSO: France jails Britons for smuggling migrants into England
French Interior Minister Gerard Collomb ruled out re-opening a migrant centre in Calais, saying it could act as an encouragement for migrants to head for France.
Toubon took issue with the minister's “false” claim.
“Everything shows that migration is the necessity to flee one's country and the political situation there, or war, flooding, drought, famine, or the denial of rights to women and homosexuals… there is no magnet effect in operation here.”
Toubon said that as soon as migrants enter France “their fundamental rights must be guaranteed”.
Europe's migrant influx began in 2015, focused on Greece where hundreds of thousands of people crossed from Turkey as they fled war and poverty in the Middle East and Afghanistan.
The crisis receded in 2016 under an agreement with Turkey to clamp down on illegal border crossings.
However, it revived this year, focusing instead on sea crossings from Libya to Italy, mostly by people from sub-Saharan Africa.