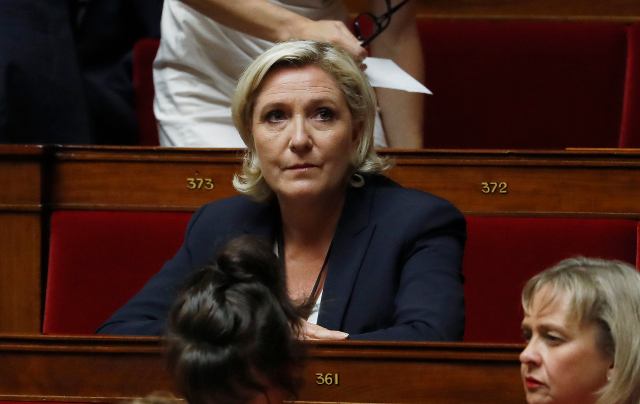 The two days of discussions at FN headquarters outside Paris are the start of a process that could overhaul the party, including a possible name change, as it seeks a fresh start.

“We will take stock of the elections and look at what worked and what didn't,” Le Pen, 48, told France 2 television ahead of the meeting.

She said the FN would then hold a “wide consultation” with party members, which will probably take place in September.

Le Pen, running on an anti-EU and anti-immigration platform, was beaten by 66 percent to 44 percent by 39-year-old centrist Emmanuel Macron in the May 7 runoff.

Her campaign for that decisive second round was widely criticised, especially her poor performance in a head-to-head TV debate with Macron.

In the parliamentary elections that followed, the FN won just eight seats in the 577-member National Assembly, below its target of 15 seats, as Macron's centrist party obtained a comfortable majority.

One policy position that the FN looks set to dump is its proposal to pull France out of the euro.

In the eyes of many commentators, the pledge became a millstone around Le Pen's neck during the campaign as polls showed most French voters did not support it and the party sought to fudge its stance in the final days before the runoff.

“I think that on this monetary issue we could in fact reverse our stance,” FN secretary general Nicolas Bay told FranceInfo radio.

“I think we need to listen to what the French people said. We did not convince people with this idea.”

But the party's deputy leader Florian Philippot, a strong supporter of the euro withdrawal policy, warned against calling into question the party's entire programme.

He said Le Pen needed to be able to speak to the French electorate “on issues beyond the traditional subjects of the National Front, such as immigration and crime”.

Le Pen has previously said there are “many things to change”, including the name of the party she inherited from her father, FN co-founder Jean-Marie Le Pen.