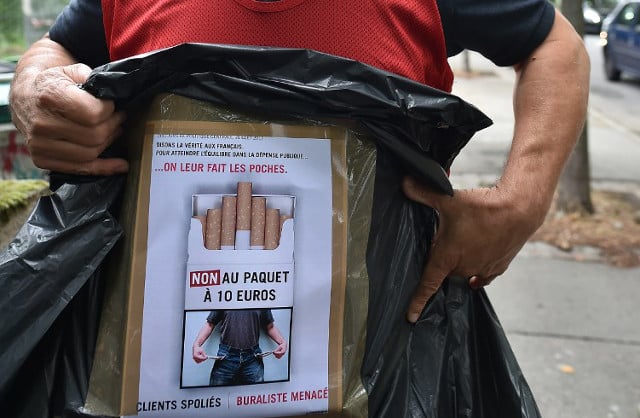 Photo: AFP
Cigarette sellers took to the streets to slam the government's plan to steadily increase the price of a packet of cigarettes from €7 to €10 over the next three years.
Overnight on Thursday, cigarette sellers in the southern city of Toulouse, the northern region of Picardy and Bearn near the Pyrenees, the Loire area in east central France and Gironde, a department in the south west, as well as other parts of France, covered speed cameras with plastic bags in protest against the government's recently announced plan.
Some even covered their faces with masks showing the face of French President Emmanuel Macron or health minister Agnès Buzyn (see below).

And in Toulouse, they didn't stop there, putting up posters saying, “No to the €10 packet, clients deprived, cigarette sellers threatened” and rolled out a banner which said “Getting rid of tobacco vendors will not cut down on smoking”.
READ ALSO: Photo: AFP
“This product is dangerous but every government fights against this scourge by raising prices – there aren't enough preventative measures focused on young people,” said  Gérard Vidal, president of the federation of cigarette sellers unions in the southern area of Occitanie near the Spanish border.
Vidal went on to demand a real “plan of action in the fight against the black market cross-border sales and on the internet.”

He went on to specify that in Andorra – the principality situated between France and Spain in the Pyrenees mountains – cigarettes are just €2.
This means that once the price hike comes into effect, cigarette sellers in Toulouse will be directly competing with another, cheaper, market.
The confederation of cigarette sellers met with the minister of health Agnès Buzyn on Wednesday to announce the “rising worry” in the profession, two weeks after the government said that the price of a packet of cigarettes would increase to €10 in the next three years.
Health minister Agnès Buzyn said that her aim is “for the children born today to be France's first generation of non-smokers.”
And with 80,000 tobacco-related deaths in France each year, “doing nothing is not an option,” prime minister Edouard Philippe said when he announced the plan.