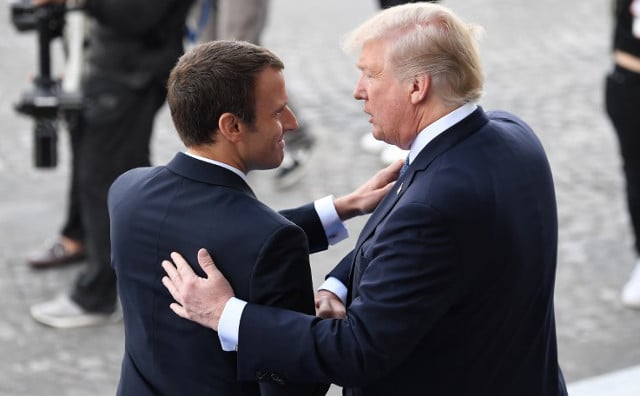 Photo: AFP
Donald Trump has reviewed his trip to Paris a week after the US president dined at the Eiffel Tower with Emmanuel Macron, toured the Invalides monument and was the guest of honour at the annual July 14th parade.
In an interview with the New York Times on Wednesday, the US president spoke of his relationship with his French counterpart, calling him “a great guy”.
He went on to say that Macron is, “Smart. Strong” and somewhat surprisingly added that the French president, “Loves holding my hand.”
“People don’t realize he loves holding my hand. And that’s good, as far as that goes,” he said. “I mean, really. He’s a very good person. And a tough guy, but look, he has to be. I think he is going to be a terrific president of France. But he does love holding my hand.” According to Trump, the invitation to Paris for France's national day went something like this, “I'd love to have you there and honor you in France.”
“Plus, it’s the 100th year [anniversary] of the First World War. That’s big. And I said yes. I mean, I have a great relationship with him.”
READ ALSO: Photo: AFP
Although in the interview US president did admit that he had some doubts about the trip given that he had just pulled the US out of the Paris climate deal.
When he received the invitation he asked Macron: “Do you think it’s a good thing for me to go to Paris? I just ended the Paris Accord last week. Is this a good thing?”
Apparently Macron responded to Trump's concerns with the words, “They love you in France.”
If true, this would be a somewhat surprising assertion from the French president considering the fact that news of Trump's trip to Paris wasn't entirely well received after he angered many in the French capital – not least the city's mayor – when he suggested France and Paris had changed beyond recognition, hinting that immigration from Islamic countries was to blame. Trump also praised France's national day military parade which this year marked the 100th anniversary of the US joining the war with French troops in World War I. He suggested the United States should copy the example of the French.
“It was one of the most beautiful parades I have ever seen. And in fact, we should do one one day down Pennsylvania Ave,” he said.
He went on to say: “The Bastille Day parade was — now that was a super-duper.
“They must have had 200 planes over our heads. Normally you have the planes and that’s it, like the Super Bowl parade. And everyone goes crazy, and that’s it.”
It's perhaps not so surprising that the US President was left with such a positive impression of France.
After all, in addition to the military parade, during his 24-hour trip to Paris with the US first lady Melania Trump the pair were given a tour of some of the French capital's most famous sites before dining with the Macrons in the swanky Jules Verne restaurant on the second floor of the Eiffel Tower.