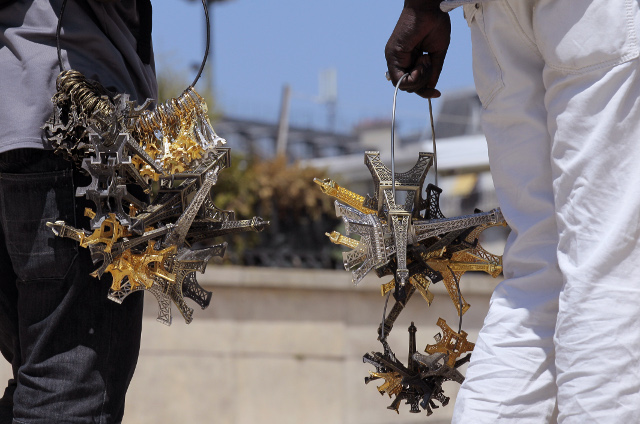 The attack happened while police officers were on patrol at the Eiffel Tower on Tuesday night, Le Parisien newspaper reported.

They confronted a 19-year-old souvenir seller and asked him for the license allowing him to sell merchandise, but the man tried to flee.

When police caught up with him and tried to confiscate his miniature Eiffel Towers he used them to attack the two officers, leaving one of them with a head wound.

The man, described as a “repeat offender” was arrested and his bag of souvenirs including miniature Eiffel Towers, key rings, selfie sticks and magnets was taken away by police.

The incident is just the latest violent confrontation between illegal souvenir sellers in Paris and police whose cat and mouse chases have often ended in fisticuffs.

In August 2015 a video was uploaded onto the internet showing several sellers punching and kicking an officer as he tried to confiscate a seller’s goods.

The amateur clip, apparently taken by a tourist, was filmed in the Jardin des Tuileries in central Paris, during the middle of the day.

It appears to show an attempted arrest of an illegal Eiffel Tower seller by police that quickly degenerates into violence.

As police try to confiscate the miniature Eiffel Towers sold by the man, several other sellers try to intervene and are seen throwing punches at police and launching kicks to an officer's head.

The flash confrontation is only dispersed when a female police officer uses pepper spray on the group.

In 2011 French police decided to get tough on the sellers by drafting in the riot police to patrol the Eiffel Tower.

Hundreds were arrested under new powers but there were regular violent clashes that saw sellers hurl objects at police whom they accused of being racist.

Given the vendors are still a regular sight for anyone visiting the capital's tourist spots, all efforts by law and order to crack down on them appear to have failed.