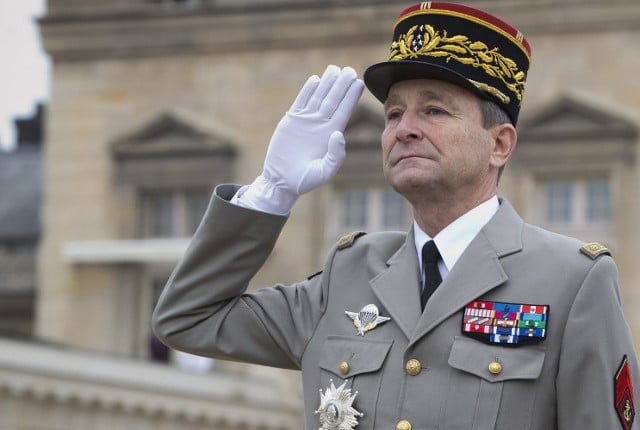 Photo: AFP
Macron was being slammed by politicians from all sides who accuse him of provoking the resignation of the country's armed forces General Pierre De Villiers on Wednesday.
De Villiers quit after a public row with Macron that began when the general complained about planned €850 million cuts to the budget of the armed forces. That led to the president giving De Villiers a very public rebuke. Some critics described it as a humiliation.
But while De Villiers has been described as a general with a fiery temperament, most are blaming Macron for an almost unprecedented crisis, that ended with the first resignation of a military chief since 1958 (the beginning of France's fifth republic).
Marine Le Pen, the far-right leader whom Macron beat in the presidential runoff, said the French military had lost “a man of huge value” and claimed the resignation showed “the very serious abuses and worrying limits” of the president's leadership.
De Villiers is seen as one of the finest officers of his generation.
He is well-liked by the rank and file and said he believed it was his duty to inform politicians of his “reservations”.
READ ALSO: Photo: AFP
Bernard Accoyer, the general secretary of the right wing Republicains party said: “The resignation of the chief of the armed forces Pierre de Villiers is the result of commitments to the army not being upheld and a form of humiliation being acted upon the military institution.”
He went on to say: “The resignation constitutes a serious decision, without precedent, which must be considered an alarm bell.”
While Damien Abad, a member of the opposition Republicans who sits on the parliamentary defence committee, tweeted that Macron's “excessive authoritarianism led to the resignation”.
President of Les Republicains in the French senate, Gérard Larcher also took to Twitter to express his thoughts on the army chief's resignation: “Resignation of Pierre De Villiers: homage to a great soldier who served his nation with bravery and dignity until the end.”

Ex-presidential candidate for this year's election, socialist Benoit Hamon tweeted: “The resignation of Pierre de Villiers after the announcement of budgetary cuts to the army is Emmanuel Macron's new work of art.”

While the leader of the hard-left La France Insoumise party (LFI), Jean-Luc Melenchon, was also sharply critical, noting that De Villiers' budget remarks to a parliamentary committee had been made behind closed doors and that he was duty bound to “respond frankly”.
Eric Coquerel from Jean Luc Melenchon's far-left party told French TV news channel LCI: “I am sorry about this resignation because General de Villiers is a patriot and a man of honour, adding that if De Villiers can't defend his mission “we are no longer in a democracy.”
Macron however attempted to move on quickly. The president who wold have known his stern rebuke would likely result in the resignation of De Villiers  named 55-year-old General Francois Lecointre, currently the top military adviser to the prime minister, as his replacement.
De Villiers and Macron were due to meet on Friday in a bid to smooth over what had become a very public row over government cuts to the armed forces.
De Villiers, whose role as head of France's armed forces was prolonged by Macron back in June, had initially publicly complained about the government's plan to cut the military's budget by €850 million, predominantly by saving money on equipment.
The irate De Villiers, known for talking frankly, told a parliamentary committee: “I won't let you screw me like that” (Je ne me laisserai pas baiser comme ça).
That prompted an angry Macron to make a speech at the Ministry of Defence last week in which he bluntly reminded those present that: “I am your boss”. Photo: AFP
The president was criticized by some military experts for his public dressing down of De Villiers in front of his “subordinates”.
The army chief was clearly not impressed either and by deciding to step down handed Macron his first major crisis as president.
Experts warned that Macron's decision to publicly scold a general in front of his own men was always likely to provoke a response.
“Armies basically obey. So in substance the president was within his rights to restate his authority,” a former chief of the French armed forces Henri Bentégeat told Le Monde newspaper.
“But the way he did it will leave marks. You cannot publicly question a military leader like that in front of his subordinates,” said Bentégeat, who said that the head of the armed forces was “just doing his duty” by defending the budget for the military.
“When Macron attends the first ceremony for a soldier killed because of a lack of equipment, all the criticism will be directed at him,” said Bentégeant.
De Villiers is seen as one of the finest officers of his generation.
He is well-liked by the rank and file and said he believed it was his duty to inform politicians of his “reservations”.