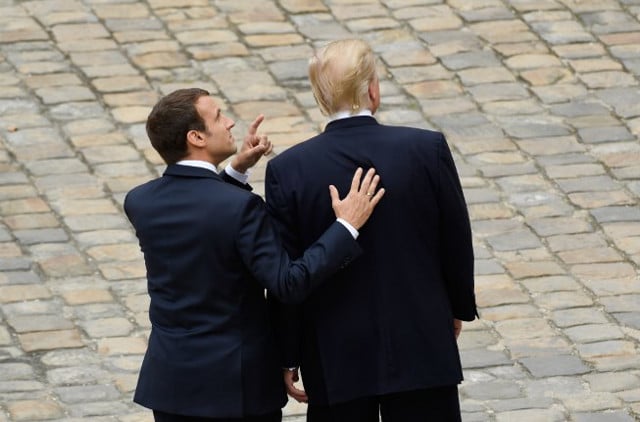 "Look up and see who's top of the rankings Donald." Photo: AFP

France has overtaken the US and the UK to become the world’s top soft power, according to an annual report published on Tuesday.

The report, titled Soft Power 30, was published by PR firm Portland Communications which ranks countries on their ability to influence other countries through appeal and attraction rather than the “hard power” of military or economic coercion.

France has risen from fifth position in last year’s rankings to top of the table, knocking the US (third) off its top perch and overtaking the UK (second) and Germany (fourth) in the process. Canada was ranked fifth (full rankings below).

It appears the positions of France and the US have much to do with the election of their respective presidents – the centrist Emmanuel Macron and the populist Donald Trump. “Trump’s ‘America First’ doctrine has played poorly abroad, alienating allies and damaging links with the rest of the world,” the report said.

But the authors were much more positive about the impact of the election of Emmanuel Macron in France.

“France’s soft power has no doubt seen a boost with the defeat of the National Front and election of its youngest ever president, Emmanuel Macron,” the authors of the report stated. The report, which looked at everything from government and culture to cuisine and attractiveness to tourists, also believes that if Macron can successfully reform France’s rigid labour market then that will boost the country’s influence not only in Europe but beyond.

“What emerges from these reforms will likely be a more dynamic and energised France that plays a leading role in the EU and perhaps shows greater global leadership overall,” the report said.

That statement appears to back up President Macron’s diplomatic strategy of welcoming as many world leaders as possible to Paris in an extremely short space of time.

Since he was elected in early May, Macron has welcomed Russia’s Vladimir Putin at Versailles, dined with Donald Trump at the Eiffel Tower and also held talks with British Prime Minister Theresa May and German Chancellor Angela Merkel.

The latest head of state to visit was Israel’s Benjamin Netanyahu, for whom Macron ignored criticism in order to invite him to the anniversary of France's round-up of Jews in World War Two.

While some have criticized Macron for spending far too much time with world leaders, most in France give him credit for his efforts to restore France’s position as a world leader. While his diplomatic initiatives haven’t achieved any immediate results he has persuaded Angela Merkel to consider reforming EU treaties, which in the past she been steadfastly against, and after talks in Paris last week Donald Trump even suggested that the US might not withdraw from the Paris climate deal after all.

France’s youngest president was also complimented for being tech savvy.

His ability to use “social media to galvanise domestic and international audiences” was credited with boosting France’s ranking.

But it wasn’t all about the new president.

“It is unrivalled in terms of membership to multilateral and international organisations, as well as in its diplomatic cultural missions,” it said.

And while Macron’s election might have boosted France’s ranking so too did some of the mainstays of French culture that have been around far longer than the dapper new president.

“The threat of terrorism has not stopped tourists flocking to France and enjoying its rich cultural offering, cuisine, and lifestyle — France’s restaurant scene is unrivalled, its film sector continues to flourish, and its museums and galleries are some of the most visited in the world,” the report said.