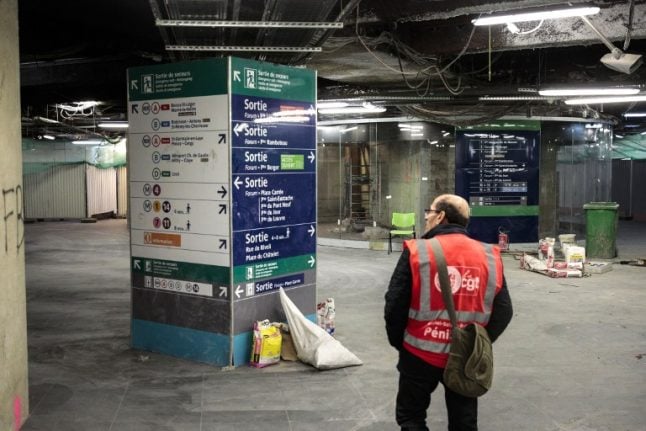 Photo: AFP
Summer in Paris means inevitable public transport and road works and other parts of France aren't going to get off scot-free either.
Here's how you'll be affected.
Metro lines and RER
As usual, there will be some disgruntled commuters on the Metro  and RER lines during July and August, with more than 100 construction sites set to affect the city's rail system.
Some of these will affect the lines for the entire summer and some will only affect weekend travel plans.
One of the biggest summer renovation projects will be on RER E for the planned extension of the line towards la Defense and Mantes in Yvelines, a suburb to the west of Paris.
Other big projects include the building of the first line of the Grand Paris Express – dubbed the supermetro which represents a massive expansion and update of the rail and Metro network in and around Paris, as well as the planned split of the T4 tramway which will go in the direction of Clichy as well as Montfermeil in the northeastern suburbs of Paris.
Existing rail lines set to be affected by construction projects this summer include line R which is having 55 km of tracks replaced ready for new trains which are due to be in place by the end of the year.
RER C will also see the major section of the line that runs through Paris closed for works. As the map above suggests there will be no trains between the stations Austerlitz and Javel between July 15th and August 26th as well as between Paris Austerlitz and Avenue Henri-Martin.
Passengers are urged to take Metro Line 10 or buses.
On RER A, Europe's busiest train line, the central section of the line will be closed between the stations Nation and La Defense from July 27th to August 29th.
The line will also be closed between Maisons-Laffitte and Poissy during the same dates.
In order to travel around this central area of the capital, it will be necessary to take line one on the Metro and use the corresponding metro lines or RER B, D and E to access the closed stations (Etoile, Auber, Chatelet and Gare de Lyon).

The process of automising Metro line four will continue, with the modernisation of certain stations including the addition of the safety barriers on the platforms, in preparation for a completely automised service due to be in place by 2022.
Three stations on line four will be see closures this summer: Chauteau d'Eau (from June 30th to July 2nd), Chauteau Rouge (until July 31st) and Saint Sulpice (until September 7th). Photo: AFP
Cycle lanes
The plan to improve the lives of cyclists launched by the Paris Town Hall in 2015 will quickly accelerate this summer with the creation of three big new cycling routes.
Construction on one of these, going from Saint-Paul church to the Hotel de Ville on the Rue de Rivoli in the centre of the city, is due to start in August, and is set to take until December. During this time, there will only be one lane for traffic.
In the west of the city, the construction of a new cycle route between Boulogne-Billancourt and the Bir-Hakeim bridge  over the Seine will see the closure of the Voie Georges-Pompidou that runs along the river from July 23rd to August 24th.
“We have chosen to carry out this work during the summer to have the least impact on traffic as possible and the least disruptive scenario is to completely close the traffic on the embankments for one month so that the work can be completed as quickly as possible,” Christophe Najdovski, in charge of transport and roads at the Paris Town Hall, said.
In the 11th arrondissement of Paris, the construction of a 3km-long cycling route planned for Boulevard Voltaire started on July 17th with construction expected to last for 18 months.
This will also see the space for cars reduced to one lane in each direction – apart from the sections of road that lead up to place Léon-Blum and Place de la République, where there will still be two lanes.
Roads and pavements
In other parts of the French capital, work will be carried out to improve the life of pedestrians in the city.
Planned construction works will see pavements extended and re-built across the city, leading to the closure of Rue des Lyonnais (5th arrondissement) from July 10th to September 1st and Boulevard de Reims (17th arrondissement) between Avenue de la Porte-d’Asnières and rue Raymond-Pitet until August 13th.
Life will also be made more difficult for drivers around Porte d’Italie (13th arrondissement) where the building of a road designed to reduce traffic pollutants will begin from July 24th limiting the number of car lanes.
Other roads due to be affected by road works this summer include avenue Poincaré (16th arrondissement), which will limit traffic to travelling in one direction from place Victor-Hugo to Place du Trocadero from July 17th to August 18th, as well as Rue de Charonne (11th arrondissement), where construction work to create accessibility to a bus stop will see the closure of the lanes going between Boulevard Voltaire and Rue Léon-Frot. A map of where transport works are set to affect Paris this summer. Image: Paris Town Hall
Elsewhere in France…
It isn't only the French capital that will see a massive amount of construction projects being launched this summer, other parts of France will also be affected.
In Toulouse, line A on the city's metro system will be out of use until August 20th in order that the rail tracks can be extended to twice their current length.
And in Lyon, the northern ring road will be closed for six weeks from July 17th to August 28th as a result of a series of changes that will see, among other things, the improvement of tunnels on the highway.
Tours in the Loire Valley will also be affected by summer construction projects with the closure of the Pont Mirabeau which started on July 17th. The two access routes to the bridge will be closed until August 25th on the Quai Paul Bert side of the bridge in order to replace the certain joints.
In Orleans in central France, line A of the tramway will be suspended for six weeks from July 17th in the south of the city. During this time, the trams will no longer stop between the Tourelle-Dauphine and Hôpital de la Source stops.
CLICK HERE for more information on motorway road closures this summer 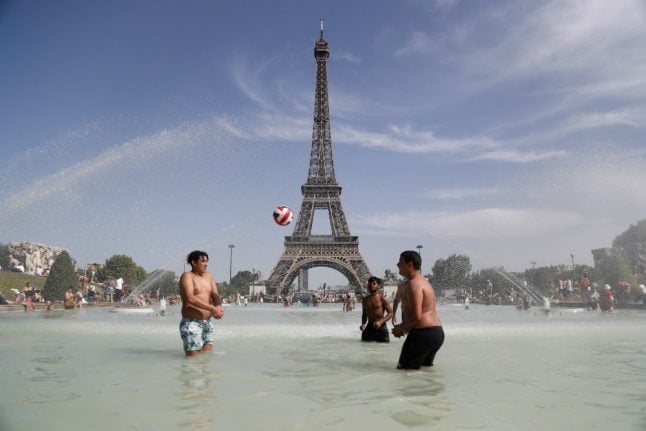