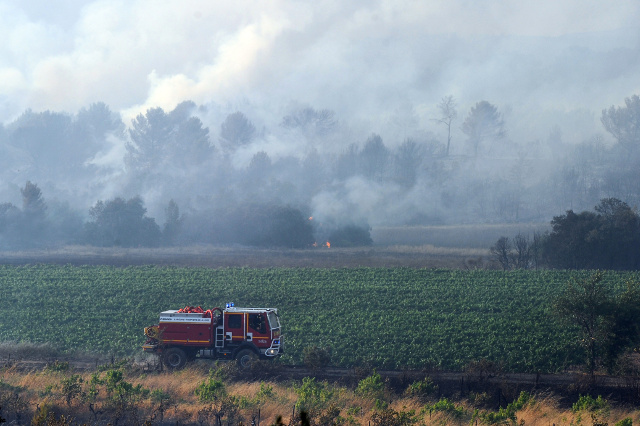 Photo: AFP
A cigarette butt is believed to have caused the wild fire that ravaged 800 hectares of land near the southern French university city of Aix-en-Provence at the weekend.
More than 800 firefighters and 210 fire engines were drafted in to tackle the wild fire that led to roads and popular walking areas being closed off to the public.
Train services between Paris and Marseille were also delayed as the fire spread close to the tracks.

The fire, which started raging in Saint-Cannat near Aix-en-Provence on Saturday, was finally under control on Sunday morning.
Despite its ferocity, the fire hasn't claimed any victims, said Bouches-du-Rhône's fire service.
“The theory of the discarded cigarette butt is currently favoured because the fire started by the side of the road,” said Rémy Avon, vice-prosecutor for the Aix-en-Provence area, noting that, “the cigarette butt that causes, even involuntarily, a forest fire, is punishable by law with three years in prison and €45,000 in fines.”

Investigations are currently being carried out by the French national police who have for the moment shrugged off suggestions of a criminal act.
“We have nothing to corroborate this,” Avon said, adding that the theory of a natural cause has also been dismissed.”
The theory that a tossed cigarette was to blame will be of no surprise to researchers who have studied the causes of forest fires in France and found that nine out of 10 are caused by human acts.
Police slammed those who let off fireworks on Saturday when the fire risk was at its greatest.
While the situation seemed to be under control, the fire services noted several small outbreaks of fire on Sunday afternoon. “Two small fires on the left border of the affected area are still very active,” the fire service said.
Walking areas in the area remained closed off on Monday.