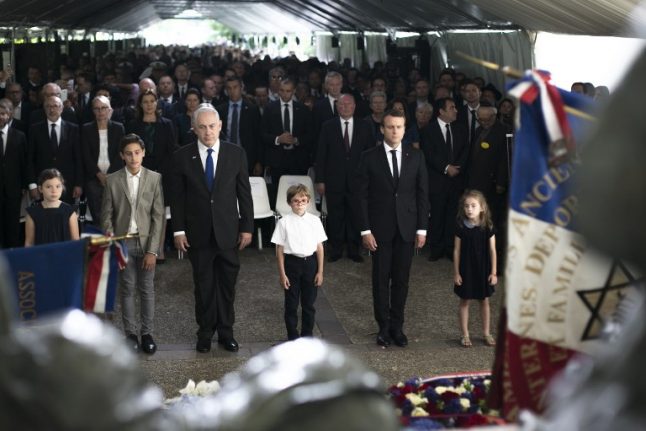 Israeli Prime Minister Benjamin Netanyahu (3rd L) and French President Emmanuel Macron (2nd R) pay their respects after laying wreaths during a ceremony commemorating the 75th anniversary of the Vel d
Speaking near the former site of the Velodrome d'Hiver, the indoor cycle track from which the Jews were deported in 1942, Macron said: “It is indeed France that organised” the roundup. “Not a single German” took part.
Netanyahu's presence at the ceremony sparked controversy, with the Union of French Jews for Peace (UJFP) calling the invitation “shocking” and “unacceptable”.
READ ALSO: French Jews condemn Netanyahu's invite to Paris Vel d'Hiv ceremony
The UJFP accused the Israeli government of “usurping the memory of the victims of Nazism to make people believe that Israel represents all the world's Jews”.
The ceremony marked the day when officials of the Vichy regime in Nazi-occupied France began rounding up 13,152 Jews and taking them to the Velodrome d'Hiver, an indoor cycle track in Paris. Fewer than 100 of those who were detained at the so-called Vel d'Hiv and then sent to the Nazi death camps survived.
Macron was the fourth French president to accept blame for France's role in the deportations — which totalled more than 75,000 — since Jacques Chirac first did so in 1995.
“Time does its work,” Macron said. “Archives open (and) the truth comes out. It's stark, irrevocable. It imposes itself on us all,” Macron said.
In a clear reference to far-right leader Marine Le Pen, the rival he defeated in May, Macron denounced “politicians who are prepared to reverse the truth”.
Le Pen had insisted during the campaign that today's France could not be accountable for the Vichy regime's actions. This 1941 file photo shows foreign Jews gathered in Paris during the first major roundup organized during World War 2 in France. Photo: AFP
'Sacred honour'
Netanyahu hailed the “special heroism” of the French resistance to the Nazis, praising the “noble French citizens who at great risk to their own lives” saved thousands more Jews from perishing in the death camps where at least six million would die overall between 1941 and 1945.
“For the sacred honour of those who perished… let us remember the past, let us secure tomorrow,” he said. “The strength of Israel is that it is the one certain guarantee that the Jewish people will never undergo a Holocaust again.”
Among other critics of Netanyahu's presence was former French ambassador to Israel, Elie Barnavi, who told AFP it made him “a little uneasy”. He added: “This story has nothing to do with Israel.”
Netanyahu, the first Israeli prime minister to attend a Vel d'Hiv commemoration, said the invitation was a “very, very strong gesture” that underscored the longstanding friendship between France and Israel.
Yellow badges
Macron addressed Netanyahu as “dear Bibi” and called “anti-Zionism” a new form of anti-Semitism.
Among Sunday's other speakers were prominent French Nazi hunter Serge Klarsfeld and Pierre-Francois Veil, son of Holocaust survivor and rights icon Simone Veil, who died late last month aged 89.
Several members of the group Sons and Daughters of the Deported Jews of France attended, wearing yellow badges recalling the yellow stars that Jews were forced to wear on their lapels during the occupation.
Netanyahu's visit is the first since he joined a massive march attended by numerous world leaders held in solidarity with the victims of the January 2015 terror attacks on the Charlie Hebdo satirical magazine and a Jewish supermarket.
He was to hold talks later Sunday with Macron, the first since the French president's election in May.
Macron met Palestinian leader Mahmud Abbas on Wednesday, when he reiterated both France's support for a two-state solution to end the Middle East conflict, and its opposition to Israel's building of settlements in occupied Palestinian territory.
Netanyahu arrives just after a surge of violence in Israel, where a gun attack by three Arab Israelis in Jerusalem's Old City Friday left two Israeli police officers and the attackers dead.
He is expected to sound Macron out on his position on the Israeli-Palestinian conflict. But it is not yet clear whether Macron will follow the pro-active line taken by his Socialist predecessor Francois Hollande, whose efforts to mobilise the international community on the question angered Israel.
Talks between Israel and the Palestinians have been at a standstill since the failure of US mediation in the spring of 2014. Since then the Israeli-Palestinian conflict has simmered on, with the occasional surge of violence such as Friday's killings.
The two leaders are also expected to discuss Israel's arch-foe Iran, in particular Tehran's role in the Syrian conflict, where it is backing President Bashar al-Assad.