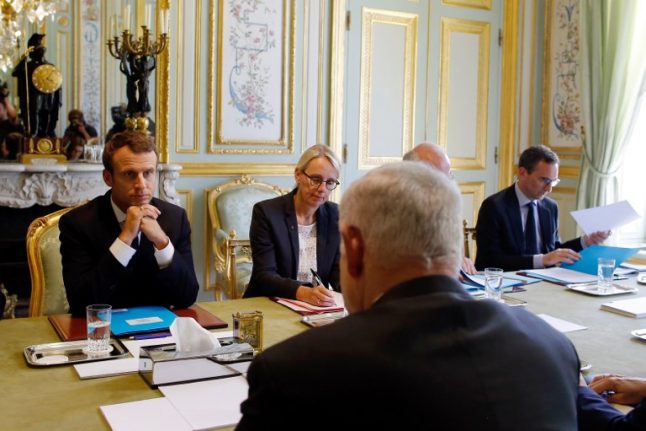 Macron speaks with Israeli PM Benjamin Netanyahu during a meeting at the Elysee Palace in Paris on Sunday. PHOTO: STEPHANE MAHE / POOL / AFP
Netanyahu “expressed his concerns regarding the Iranian regime,” Macron told reporters with Netanyahu at his side.
“I assured him of our vigilance, in particular over the strict implementation of the accord… in all its provisions.”
Netanyahu was a vocal opponent of the deal, which saw sanctions against Iran eased in return for curbs on its nuclear programme.
READ ALSO: Macron, Netanyahu mark 75 years since Paris roundup of Jews
The French presidency said Sunday's meeting, the first official talks between Macron and Netanyahu, would be an occasion to “signal our lack of complacency towards Iran”.
Israel was rattled last month when Tehran launched fired six missiles from western Iran targeting bases of the Islamic State group in retaliation for attacks in Tehran that killed 17 people in the first Isis-claimed operations in the country.
Netanyahu has repeatedly said Iran is a threat to the Jewish state, the Middle East and potentially the world.