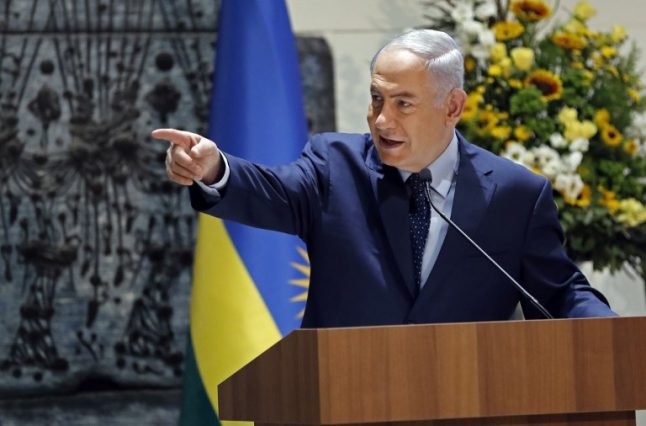 Israeli Prime Minister Benjamin Netanyahu, shown during a meeting with Rwanda's President Paul Kagame earlier this month. PHOTO: THOMAS COEX / AFP
He will also hold talks with Emmanuel Macron for the first time since the French president's election, barely a week after Macron met Palestinian leader Mahmoud Abbas.
Sunday's ceremony marks the day in 1942 that officials of the Vichy regime in Nazi-occupied France, began rounding up more than 13,000 Jews in the Velodrome d'Hiver, an indoor cycle track in Paris. Fewer than 100 of those who were detained at the so-called Vel d'Hiv and then sent to the Nazi death camps survived.
Netanyahu arrives just after a surge of violence in Israel, where a gun attack by three Arab Israelis in Jerusalem's Old City Friday left two Israeli police officers and the attackers dead.
But his invitation to attend Sunday's ceremony has not been universally welcomed.
The Union of French Jews for Peace (UJFP) described the decision to invite Netanyahu as “shocking” and “unacceptable”. France's Communist Party also protested, saying Netanyahu was not bringing a message of peace. And former French ambassador to Israel, Elie Barnavi, told AFP: “The presence of Netanyahu makes me a little uneasy.
“This story has nothing to do with Israel,” he added.
Netanyahu a 'formidable political animal'
The Israeli leader's last visit to France was to attend a march held in solidarity with the victims of the January 2015 terror attacks on Charlie Hebdo and a Jewish supermarket.
Netanyahu's talks with Macron will follow Sunday morning's commemoration ceremony and will be looking for a clearer idea of the French president's position on the Israeli-Palestinian conflict.
Earlier this month, Macron held talks with Palestinian president Mahmoud Abbas at the Elysee Palace. He chose that occasion to reiterate both France's support for a two-state solution to end the Middle East conflict, and its opposition to Israel's building of settlements in occupied Palestinian territory.
But it is not yet clear if Macron will follow the more interventionist line taken by his predecessor Francois Hollande, whose efforts to mobilise the international community on the question angered Israel.
Talks between Israel and the Palestinians have not resumed since the failure of US mediation in the spring of 2014. Since then the Israeli-Palestinian conflict has simmered on, with the occasional surge of violence such as Friday's killings.
“France and Europe have to get to grips with the question,” former ambassador Barnavi, told AFP.
“There is perhaps an opportunity, given the state the White House is in at the moment, and the 'plans' of Donald Trump, which are still pretty vague and mysterious,” he added.
Trump, who at one point seemed to be backing away from Washington's longstanding commitment to a two-state solution, called on both sides to make compromises during a visit to the region in May.
But he offered no specifics on how he would resolve the decades-old conflict.
The two leaders are also expected to discuss Iran, in particular its role in the Syrian conflict, where it is backing the Syrian President Bashar al-Assad.