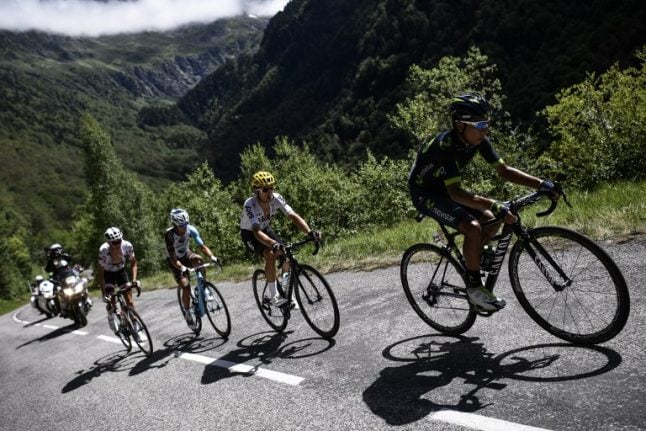 Just the Massif Central and Alps remain for the Tour competitors. Photo: PHILIPPE LOPEZ / AFP
The Vosges, Jura and Pyrenees have been and gone meaning that just the Massif Central and Alps remain but Saturday will likely offer a quieter day for the overall contenders including race leader Fabio Aru and reigning champion Chris Froome.
Not so for Bastille Day hero Warren Barguil, though. The 25-year-old delighted the French crowd in Foix on Friday by winning his maiden Tour stage, on France's national holiday to boot. But he will have little time to celebrate on Saturday as he returns to team duties.
“The next stage is already tomorrow (Saturday) for Michael (Matthews) because there's going to be a sprint,” he said after his victory.
The race moves from the yellow jersey battle which raged on Friday to the green jersey one on Saturday and a chance for Australian Matthews to make up some much needed ground.
German Marcel Kittel has dominated that competition so far on the back of five stage wins but Matthews has a chance of closing his 128-point deficit if he can make the most of the next three days over lumpy terrain.
Saturday's 181.5km 14th stage begins in Blagnac, the hub of the European aeronautics industry, and ends in Rodez, known for its sheep tripe speciality.
The bumpy run-in that crests two third category climbs before finishing on a steep 570-metre climb with a 9.7 percent average gradient will be too tough for Kittel and the other specialist sprinters.
But it's ideal territory for an all-rounder like Matthews and with 50 points on offer at the line to the winner, the Aussie Sunweb rider could start to make some inroads into Kittel's lead.
But he'll have Olympic champion Greg Van Avermaet to contend with among others.
Belgian Van Avermaet won a stage finish in Rodez two years ago, outsprinting world champion Peter Sagan in the process.
Sagan would have been a favourite for Saturday's stage but was kicked out of the race last week for elbowing British sprinter Mark Cavendish in a pacey finish.
With the overall contenders set to take something of a back seat, there will be a bun-fight to get in the day's breakaway as it has a great chance of going all the way.
The sprinters' teams won't feel the need to chase, neither will the contenders' teams so it should be a large breakaway containing some top one-day classics specialists.
Van Avermaet and Matthews are certain to be amongst them.