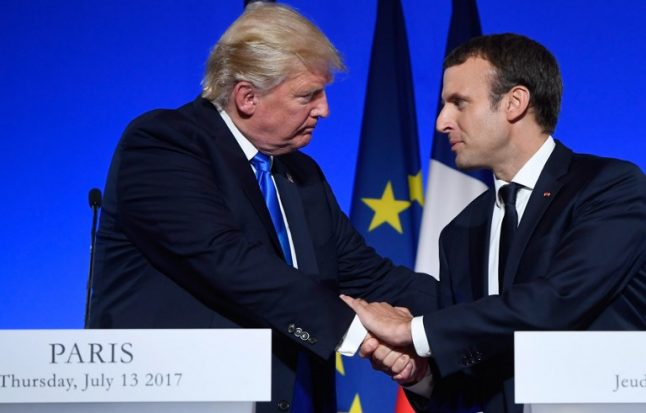 In the past Trump has had some harsh words about France, saying it was no longer the country it once was and claiming it was at fault for the terror attacks it had suffered because it had allowed immigrants into the country.

Asked at a press conference at the Elysee Palace on Thursday if he still felt the same way Trump was a little more complimentary about France and his French counterpart Emmanuel Macron.

Asked if he still thinks “France is no longer France” Trump says “This is one of the most beautiful countries in the world” #tellJim pic.twitter.com/x7HPsKZuiG

“You know what, it's going to be just fine because you have a great president,” said Trump, who had suggested Marine Le Pen was a stronger candidate in the French presidential election.

“This is one of the most beautiful countries in the world. You have a tough president, and he's going to be tough on people breaking the laws.

“I have a feeling you will have a peaceful and beautiful Paris and I'm coming back,” said Trump, who described ties between France and the US as “unbreakable”.

“The friendship between our two countries is unbreakable,” said Trump.

There was little sign of disagreement as their pair nodded approvingly at each other's statements.

Macron said the pair's dinner at the Eiffel Tower on Thursday evening would be a “dinner of friends”.

Trump really licking up to Macron: “France will be just fine because you have a great president, a tough president”and says he's coming back pic.twitter.com/sAIEPtbB26

After talks between the pair, both presidents vowed to “eradicate” terrorism and step up the fight against jihadist propaganda online.

The US president and his wife Melania are in Paris as Macron's guest of honour during celebrations for Bastille Day on Friday, France's national day, which will also celebrate the 100th anniversary of US involvement in World War I.

Accompanied by First Lady Melania Trump, the 71-year-old stepped onto French soil for the first time as president on Thursday morning, hoping to leave behind weighty allegations that his family and inner circle colluded with Russia to win the 2016 US election.

The scandal has put his son and top aides in legal jeopardy, cast a pall over his efforts to remake the political agenda and may yet imperil his presidency.

But Trump described his son as a “wonderful young man” who was simply taking part in “opposition research”.

The French president admitted that the pair remain at odds over Trump's decision to pull the US out of the Paris climate deal.

But after the meeting between them Trump suggested he could change his position.

“Something could happen with respect to the Paris accord. We'll see what happens.”

Earlier Macron gave Trump a personal tour of Napoleon's tomb at the Invalides military complex in central Paris, before the two men headed for talks.

While the pair were engaged in talks the first ladies Melania Trump and Brigitte Macron went on a sightseeing tour of Paris, taking in Notre-Dame Cathedral and a cruise on the river Seine.

On Thursday evening the four will settle down to lobster and caviar at the Jules Verne restaurant on the second floor of the Eiffel Tower which offers stunning views across Paris.

Macron described it as a “dinner among friends”.

But not everyone was happy with Donald Trump's presence in Paris.

A “No Trump Zone” was declared in Place de la Republique by opponents of the US president and Democrats Abroad France held a protest at Place des Etats Unis.

Catherine Gatchell told The Local: “We want the French to know that not all Americans are like Trump or behind Trump.

“The French are very inspiring right now. There is a vacuum of leadership in America.”

“No Trump, no KKK, no fascist USA” – the chanting continues at Democrats Abroad protest #TrumpParis pic.twitter.com/JC9kUA8dfr

Bob Vallier one of the organisers of the protest told The Local: “Lots of Americans who live in France are angry about Trump's politics. We thanks Macron for inviting Trump and giving us a chance to express our values.”

Trump and Macron will watch Friday's Bastille Day military parade together as they mark the centennial of the US entry into World War I in 1917.

Nearly 11,000 police officers will be on duty, with France in its highest state of alert after a string of terror attacks since 2015 that have killed more than 300 people.

In early July, police charged a 23-year-old suspected far-right activist with plotting to assassinate Macron at the Bastille Day parade.